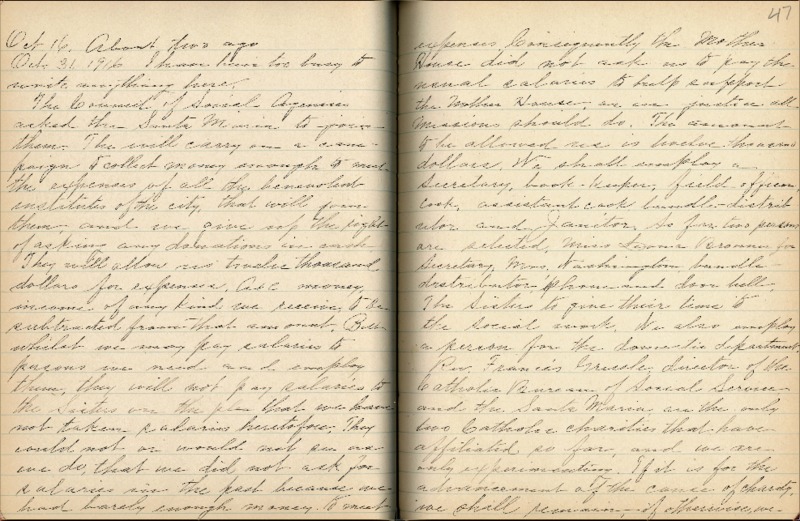 Nearly twenty years after their founding, the Sisters continued to seek resources to support their efforts in an urban Catholic Church called upon to meet the needs of several struggling immigrant communities.  Cooperation with secular agencies experimenting with more bureaucratic, professional models of benevolence was one opportunity to secure funding.

The Council of Social Agencies asked the Santa Maria to join them.  They will carry on a campaign to collect money enough to meet the expenses of all the benevolent institutes of the city that will join them, and we give up the right of asking any donations in cash.

They will allow us twelve thousand dollars for expenses.  All money, income of any kind we receive, to be subtracted from that amount.  But whilst we may pay salaries to persons we need and employ them, they will not pay salaries to the Sisters on the plea that we have not taken salaries heretofore.  They could not or would not see as we do, that we did not ask for salaries in the past because we had rarely enough money to meet expenses.  Consequently, the Mother House did not ask us to pay the usual salaries to help support the Mother House, as in justice all Missions should do.  The amount to be allowed us is twelve thousand dollars.  We shall employ a Secretary, bookkeeper, field officer, cook, assistant cook, bundle-distributor and Janitor.  So far, two persons are selected -- Miss Leona Bronner for Secretary; Mrs. Washington, bundle- distributor, phone and door bell.  The Sisters to give their time to the social work.  We also employ a person for the domestic department.

Rev. Francis Gressle, director of the Catholic Bureau of Social Service, and the Santa Maria, are the only two Catholic charities that have affiliated so far [with the Council of Social Agencies], and we are only experimenting.  If it is for the advancement of the cause of charity, we shall remain; if otherwise, we shall withdraw at the end of the year.  Rev. Father Gressle said to us that if we did not affiliate, he would not do so either.  The special thing that is unjust is not to allow the Sisters, who are doing the hardest part of the work, to draw their salaries.  If we received salaries, we would use them for the extension of the work, to build the necessary building, for we are crowded.