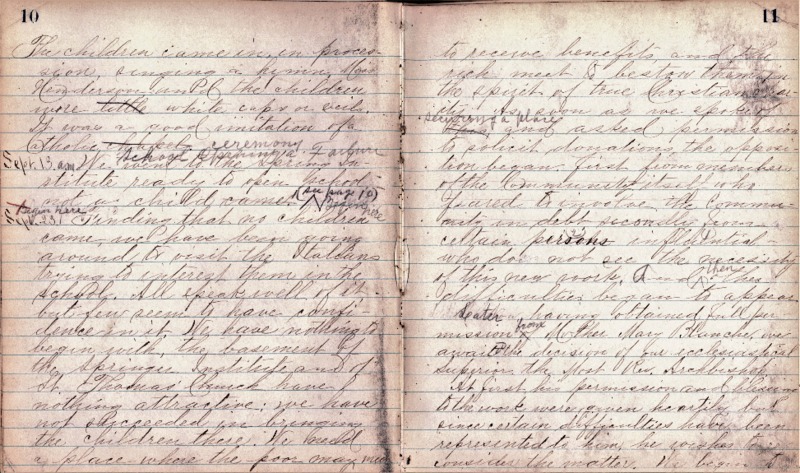 At first supported by their superior and the archbishop, the Sisters soon faced opposition from others within the Church, as well as competition from better-funded Protestant schools and agencies. This entry suggests Sister Justina’s complex understanding of the spiritual and institutional aspects of her mission.  While obedience to superiors influenced by opposition to their effort to assist Italian school children and their families posed obstacles, the spiritual model of Saint Theresa of Avila offered her encouragement within the framework of obedience and humility.

Sept. 23. Finding that no children came, we have been going around to visit the Italians trying to interest them in the school. All speak well of it, but few seem to have confidence in it. We have nothing to begin with, the basement of the Springer Institute and of St. Thomas' Church have nothing attractive; we have not succeeded in bringing the children there. We need a place where the poor may meet to receive benefits, and the rich meet to bestow them in the spirit of true Christian charity. As soon as we spoke of securing a place and asked permission to solicit donations, the opposition began, first from members of the Community itself who feared to involve the Community in debt, secondly from certain persons influential who do not see the necessity of this new work. And then other difficulties began to appear.

Later, having obtained full permission from Mother Mary Blanche, we awaited the decision of our ecclesiastical Superiors, the Most Rev. Archbishop.

At first, his permission and blessing to the work were given heartily, but since certain difficulties have been represented to him, he wishes to reconsider the matter.  We begin to realize that no good work can succeed without its cross, for that is the seal of him who died on the cross. If it is His work it will succeed despite all opposition—if it is not His work, we do not want it to succeed.  But it is manifestly His work so we do not fear though we have nothing to begin with. We found a penny on the street so that is the nucleus of the fund for the purchase of a house.  St. Theresa, when undertaking a certain foundation without means, said something to this effect: “A few pennies and Theresa are nothing; a few pennies, Theresa and God are omnipotent.”  This has been my inspiration and so I have written as our motto: “Un soldo e due Sorelle son niente.  Un soldo, due Sorelli e Dio sono omnipotente.”  This day will be memorable as a day of difficulties. His Grace, the Most Rev. Archbishop has said he wishes to think the matter over for some time, and to consult with others before undertaking anything.  We are to meet him next Friday.