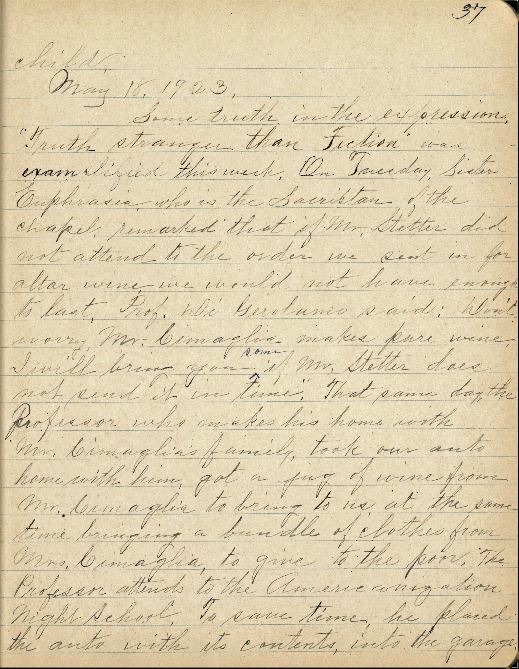 Sister Justina’s account of the arrest of a valued member of the Santa Maria’s staff for the possession of alcohol points to two issues.  First, the passage of the Eighteenth Amendment to the U. S. Constitution in 1919 prohibited the sale and consumption of alcohol.  Roman Catholics, however, used wine in the Mass, and communion wine as permitted under the amendment.  Second, Justina suggests that the portrayal of Professor Michael Di Girolamo and Italians in local newspapers was intentional, raising questions of an anti-Catholic and more specifically anti-Italian bias.  Girolamo represented the type of Italian man the Santa Maria hoped to attract as volunteers and promote among the boys and young men who frequented the Institute.

May 18, 1923. Some truth in the expression “Truth stranger than Fiction” was exemplified this week. On Tuesday, Sister Euphrasia, who is the Sacristan of the chapel, remarked that if Mr. Stetter did not attend to the order we sent in for altar wine, we would not have enough to last. Prof. Di Girolamo said: “Don’t worry, Mr. Cimaglia makes pure wine. I will bring you some if Mr. Stetter does not send it in time.” That same day the Professor, who makes his home with Mr. Cimaglia’s family, took our auto home with him, got a jug of wine from Mr. Cimaglia to bring to us, at the same time bringing a bundle of clothes from Mrs. Cimaglia to give to the poor. The Professor attends to the Americanization Night School. To save time, he placed the auto with its contents into the garage. He left his papers, list of pupils names, etc. in the auto. Next morning a reporter from the “Post” came for information. “We have an article for the “Post” but I came to see if I could get positive information from you.” It turned out that some one stole our auto -- a Ford -- and then abandoned it on Eighth near Mound. The policeman watched it to catch whoever should come for it, for it was evident the auto was a stolen one. No one came for it, so it was taken to police headquarters and contents examined. The following sensational story was involved: “An auto, abandoned, was found on Eighth Street. Letters addressed to Prof. Di Girolamo, and names of many Italian men and women, a jug of wine and men’s and women’s clothes strewn around indicate that a party had had a joy ride. The auto belongs to the Santa Maria Institute. It appears that these prominent Italian citizens are implicated in this nocturnal ride.” Sister Blandina explained to the reporter just what it was. We did not know the auto had been stolen, the wine was for the altar; the clothes for the poor, the names were those of his pupils. The most mysterious thing of all is that a letter addressed to the Safety Director, Mr. Tudor was found in the auto. Mr. Tudor says he had thrown the letter or envelope into the waste basket in his office -- how did it get into the auto? The whole matter is a mystery. Now they arrested the Professor for having wine. Mr. Cimaglia had a permit to make wine, but he destroyed it as he did not intend to use it anymore. A strange thing is that such a commotion is made over the jug of wine which so innocently found itself in trouble, and not a word about the stolen auto and the thief that stole it. Prof. Di Girolamo never drank liquor even before prohibition, and certainly not now, and yet circumstantial evidence would prove him guilty of several crimes of which he is completely innocent. The Professor’s unblemished reputation should save him from such unworthy attacks.

After the reporter learned the truth he hastened to the ‘phone and called up the “Post.” “Hold that story till I return,” he called out. The sensational story did not appear. However, the mystery of the robber still remains.

This morning we received a letter from the Italian Ambassador. He sent a check of fifty dollars to head the list of subscriptions for the new hall.