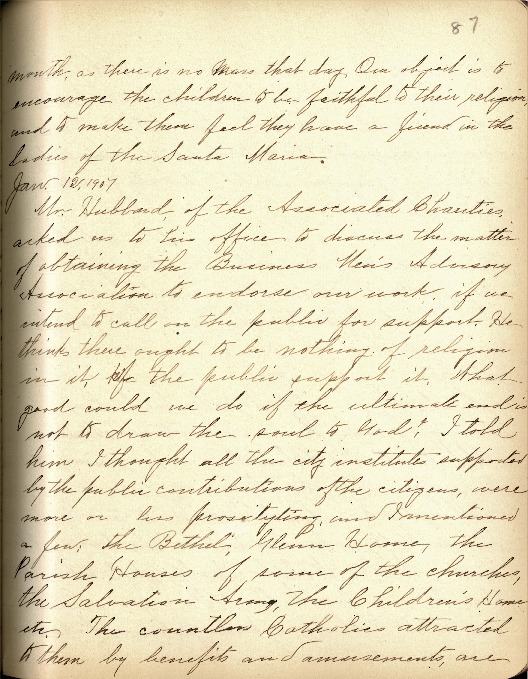 Non-Catholic Progressive social reformers adopted a secular, bureaucratic model. Catholic sisters often operated effectively within this bureaucratic model, but their approach was based on their personal experiences in administration, teaching, and social service as well as the accumulated organizational experiences of their religious communities. Catholic sisters such as Blandina and Justina established cooperative relationships with bureaucratic social service entities, but they refused to relinquish the religious impetus behind their own social service activities.

Jan. 12, 1907. Mr. Hubbard of the Associated Charities asked us to his office to discuss the matter of obtaining the Business Men’s Advisory Association to endorse our work if we intend to call on the public for support. He thinks there ought to be nothing of religion in it if the public support it. What good could we do if the ultimate end is not to draw the soul to God? I told him I thought all the city institutes supported by the public contributions of the citizens, were more or less proselytizing, and I mentioned a few; the Bethel, Glenn Home, the Parish Houses of some of the churches, the Salvation Army, the Children‘s Home, etc. The countless Catholics attracted to them by benefits and amusements, are gradually drawn away from the Church, their Faith weakened, sometimes lost.

Mr. Hubbard said he believed that each religion should claim its own, and whatever religion could do it, take those of no religion.