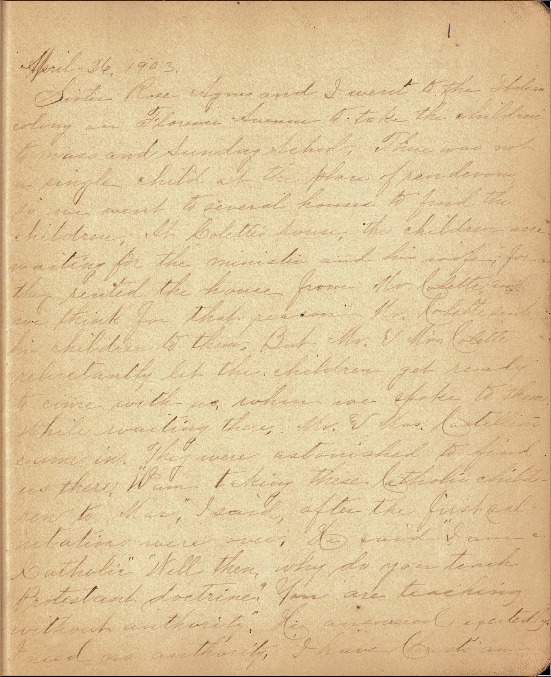 Competition among Protestant denominations and Catholic Church representatives to win the souls of immigrants in Cincinnati pitted Sisters Blandina and Justina against various Italian ministers hired by missionary societies to work among their fellow countrymen and women.  In this case, the sisters had learned that an Italian couple who were under the direction of a Methodist missionary organization had set up a church storefront in the neighborhood of Florence Avenue.  Mr. Castellini (see Document 9) claimed to be a Catholic but he was most likely a former Catholic who converted to Methodism.  Italian evangelical missionaries were recruited by American based missionary organizations with the intention of making in-roads into Italian immigrant communities.  Whether it was lay Catholics converted to Protestantism, apostate priests, or “renegade” clergymen seeking their fortune in America, Blandina and Justina would have found anyone who stood between Italian children and their Catholic faith a danger.  They went so far as to visit the head of the Methodist organization in Cincinnati in July, in an effort to put an end to the Castellinis’ efforts to win converts.[i]

April 26, 1903. Sister Rose Agnes and I went to the Italian colony on Florence Avenue to take the children to mass and Sunday School. There was not a single child at the place of rendez- vous so we went to several houses to find the children. At Colette's house, the children were waiting for the minister and his wife, for they rented the house from Mr. Colette and we think for that reason Mr. Colette sent his children to them. But Mr. and Mrs. Colette reluctantly let the children get ready to come with us, when we spoke to them. While waiting there, Mr. and Mrs. Castellini came in. They were astonished to find us there. "I am taking these Catholic children to Mass," I said, after the first salutations were over. He said, "I am a Catholic." "Well then, why do you teach Protestant doctrine? You are teaching without authority." He answered excitedly, "I need no authority, I have Christ's authority. Some priests are bad." "I do not doubt that," I replied.

"There was a Judas among the Twelve. But I am not here for a controversy. I want simply to take the Catholic children to Mass." With that I started with the several children. Mrs. Castellini took a child from my hands, saying she belonged to her Sunday school, she knew her mother did not want her to go with us. This little girl and her brother both went with her, the others with us. Mr. Castellini followed us a few steps saying to me, "Don't take these children to the priest, take them to Jesus. You are taking them to hell." I looked at the minister and said, "May God forgive you for such language," and with that I walked away. None of the bystanders said a word while we were there. But after we were gone, they must have had some quarrel, for on our return with the children, from Mass the people asked us to have Sunday school there, for Mr. Castellini was going to give up the room, he was displeased that they allowed the children to go with us. We promised to do so; rented the room he had vacated and said we would return the next Sunday. It surely is strange we should have to pay for the trouble we take to teach their children, but for the sake of their souls we gladly do it. The people showed interest in the Sunday school. It looked as if a "spell" had been broken. They began to proclaim themselves Catholic and anxious to gather as many children as possible.

May 3. We went to Florence Avenue this morning and had Sunday School in the rented room. Mr. Castellini and his wife are making desperate efforts to get the children. They had been around the different houses twice before we came. They visited around yesterday, promising to teach Italian etc. if they will send the children to them. They collected all the children they could and took them to their own house, which is in the neighborhood. From what the children said, about eight went with them.

Mr. Andriolo was one of the men who let his children go. We sent for him to reason with him on the wrong he was doing, he, a Catholic to send his children to learn Protestant catechism. He said that Mr. Castellini had implored him to send them, that he taught nothing bad, on the contrary, he taught them to sing, to be honest, etc. and that on his teaching the children depended his salary! We told him the harm he was doing and asked him as a Catholic to send his children to the Catholic Sunday School, which he promised to do.

We will have to continue to visit the people around and with God’s grace, the danger of Mr. and Mrs. Castellini’s proselytism will be lessoned.

Miss Lillie Goldstein, a Jewess, comes one evening in the week, for instruction. She is engaged to be married to an Italian, Mr. Cotoni, but she is to be baptized first, of course, to receive the sacrament of matrimony.

We are trying to procure a house. We have been offered this house for ten thousand dollars. If we can obtain Mother Sebastian's permission to purchase it, we shall borrow money and buy it at once. The title is not clear, at least for a part of the building, but there is a clear title to 66 feet, and a perpetual lease on the remaining forty feet. We are settled here; if we could purchase it, we would feel we had a home and if anything happened that we have to leave here, we would be secured a home elsewhere.

May 15. Received a telephone message from Mother Sebastian telling us not to purchase this house, so all our plans in regard to it are frustrated.