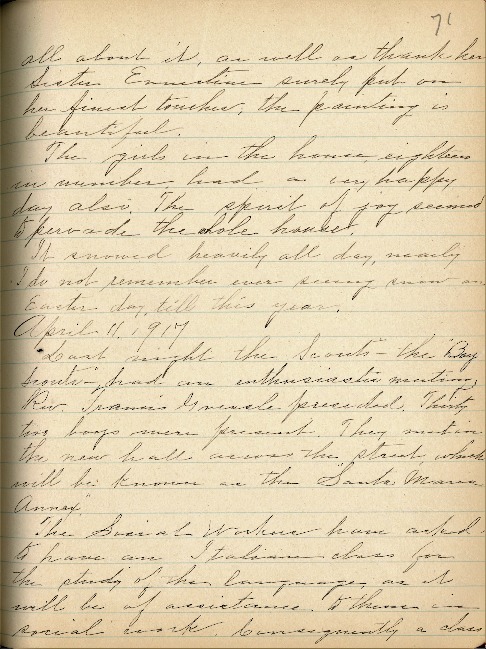 The Boy Scouts were just one of many types of clubs designed to occupy young boys’ time away from gangs and Protestant missionaries.  The Boy Scouts as a patriotic organization, also fostered an American identity, but like the Catholic national parishes, the Italian boys did not want to open its membership to other ethnic groups.  Traditionally, American Catholic parishes are territorial, but in the nineteenth century, ethnic groups built their national parishes in order to preserve their cultural identity.  The American hierarchy made room for this type of parish as a means of preserving Catholicism among immigrant groups and as means of ushering them into the larger American Catholic Church.  Blandina and Justina also relied upon Italian men to volunteer and lead scout troops like this one, who would connect their scouting experience to their Catholic faith.  Eventually, Justina reported that Mr. Nardine’s troop received the Eucharist at Mass together in their uniforms.  Documents 15 and 16 also include discussion of the on-going social work activity and the efforts to help girls.  The same year of the Boy Scouts’ founding, a Girl Scout troop, called the Girl Knights, was established under the direction of one of the female volunteers at the Santa Maria (Document 22).

April 11, 1917. Last night the Scouts – the Boy Scouts – had an enthusiastic meeting. Rev. Francis Gressle presided.  Thirty-two boys were present.  They met in the new hall across the street, which will be known as the Santa Maria Annex.

The Social Workers have asked to have an Italian class for the study of Language, as it will be of assistance to them in social work.  Consequently a class was opened.  It meets every Tuesday evening.

May 25, 1917. Mr. Nardine and Mr. Woods are taking charge of the second division of boys for scouts.  They were at the meeting last night. Fifteen Italian boys were present.  The gentlemen report the boys as very noisy.  It will require a great deal of training to receive them as scouts.  I suggested that boys of other nationalities be admitted, but Mr. Nardine says the Italian boys prefer being by themselves.  The first division, presided over by Rev. Francis Gressle, is composed of other nationalities, nearly all the Italians boys having dropped off.  The object of the boy scouts is to uplift the Italian youth.

Helen Toal has gone to Detroit with her father.  May 22, Collette La Rose returned to her own home.  She behaved well whilst here and her parents believe she will continue the same at home.