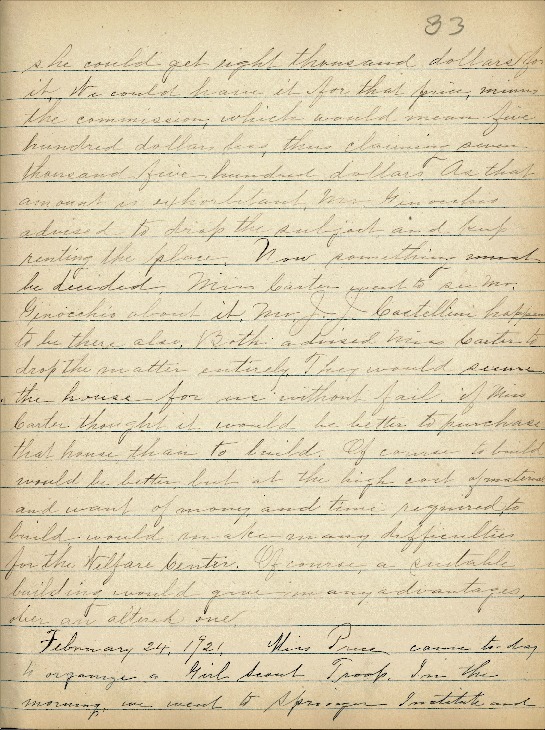 The American House was designed as a nondenominational institution to promote American citizenship among immigrants.  Justina and Blandina Segale did not trust that those involved in the establishment had the best interest of Catholic immigrants in mind.  The Santa Maria developed its own Americanization effort, one that included assuring that immigrant Catholics’ faith was protected.  In 1919, the Santa Maria, through the Bureau of Catholic Charities, used federal money to establish its own Americanization program.  Justina, however, believed that once the government gave up interest in this program, they would continue with their mission to aid Italians materially and spiritually.

February 24, 1921. Miss Price came today to organize a Girl Scout Troop. In the morning, we went to Springer Institute and to Holy Trinity School to invite the Italian girls and any other girls who wished to join, to meet at the “Center.” Twenty mothers were in class. They waited for the girls who came after school dismissed. Two divisions were organized, a Senior and a Junior.

The other day, Washington’s Birthday, there was a celebration at the American House. Sister Blandina and several of our social workers were present. The proselytizing minister was also present. Sister Blandina was called upon to give an address. She, among other things, said that the Santa Maria was training Italians for Americanization and as the most effective means to do so as to make them loyal, we begin by making them loyal to God, faithful to their religion, for one who is a traitor to God, cannot be relied upon to be loyal to the government.

The minister also spoke. He said he was working among the Italians, looking for those who had no religion. He did not say that they were making every effort to induce all Italians to go to their mission, invading the homes of our Catholics, inviting to them, offering inducements, etc. He did not mention what he said to me that he was going “to make them Protestants” also that “the Catholic Church has no religion.”

This afternoon went to teach the boys at the Kenton Street Center in preparation for their first Holy Communion. There were about fifteen present. Miss Madge Murray was there. She is certainly taking a great interest in the class. As the boys sell papers after school she asked the teacher at the Windsor School to allow the first Holy Communion class to come at two o’clock, which she kindly did. At three o’clock the girls will come. Miss Murray will teach them.