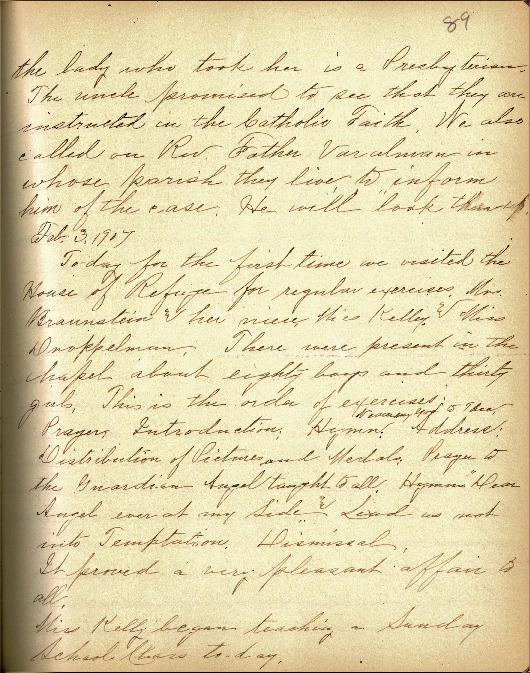 These entries from a single month suggest the range of the material and spiritual assistance Sisters Justina and Blandina sought to offer immigrant Catholics.  Encouraging middle-class, Catholic laywomen to assist them in their work and organizing them into a Willing Workers’ society, the Sisters employed a gendered model of benevolence similar to that which characterized nineteenth-century Protestant women. The Sisters and the Willing Workers emphasized assistance to poor women and their children. On the one hand, their concern for mothers and children seemed to have a basis in the idea of shared female responsibilities for nurturing others that historians have called maternalism.  On the other hand, women’s economic vulnerability and responsibility for children increased their need for assistance. Sister Justina was concerned with the spiritual needs of her Catholic neighbors as well as their material requirements: the Sisters and Willing Workers sought to preserve the faith of Catholic children in non-Catholic institutions and to provide spiritual succor and religious instruction to their neighbors.  As Sister Justina’s comments about her community’s plans to build a new hospital illustrate, the Santa Maria Institute was part of a large and successful network of medical, social, and education institutions maintained by the Sisters of Charity.

February 3, 1907. Today for the first time we visited the House of Refuge [public juvenile reformatory] for regular exercises with Mrs. Braunstein and her niece, Miss Kelly, and Miss Dnappelman. There were present in the chapel about eighty boys and thirty girls. This is the order of exercises: Prayer; Introduction; Hymn; “Near My God to Thee,” Address; Distribution  of Pictures and Medals; Prayer to the Guardian Angel taught to all; Hymns: “Dear Angel ever at my Side” and “Lead us not into Temptation;” Dismissal. It proved a very pleasant affair to all.

February 5, 1907. Last Saturday evening, Miss Walsh, the mother of Kate and Walter Walsh, left the house with the intention of going to confession. We had induced her to go to confession weekly in our efforts to reform her. We suspected strongly that she was a drunkard, but did not let her know of the suspicion, hoping by rousing her lost self-respect to be able to more surely to accomplish her reform. We had given her a nicely furnished room, a beautiful suit of clothes for Christmas though she had been here only a week; and regular wages, with the stipulation however that she let me keep her earnings, and deposit them in a savings bank, thus aiding her to make a home for her two children. She had promised to do so. As an encouragement, last Saturday I raised her wages fifty-cents weekly, and she was delighted. As I said, she left Saturday evening, and did not return. We feared that she met with some of her old acquaintances and fell into her old habit, which proved to be the case, for Monday night three poor wretched, dissipated looking women came to ask for Mrs. Walsh’s clothes. They said they were sent by her, that she had got into trouble and was now at the House of Detention. They tried to evade giving the right cause of her trouble, but in a few minutes it was told that she had been drinking. On Thursday morning, we went to see if we could obtain a pardon for her. Her son and daughter were to come to visit her on the following Sunday, and if the mother were not here, they would suspect the cause, which would have a bad effect on everybody. The Board of Pardons kindly called a special meeting in order to issue the pardon. With that in our possession we visited the workhouse in the afternoon. How crestfallen, how ashamed she was. She promised amendment, and we brought her home, but on our way, we stopped at the Cathedral, and she took the pledge. Ever since she has been a different person, and we hope that she will reform in earnest.

From information received, we think something could be done for the poor inmates of the work house. We are now trying to form a committee of ladies who will interest themselves in this cause.

Sister Rose Agnes and Sister Mary David are visiting the Italians systematically. They began this morning. The special object is to find children of age to make their First Holy Communion, those who go to the public schools, and those who are working. There are so many of these. It is quite a problem to get them to impart to them Christian Doctrine enough to receive the Sacraments of penance and Holy Eucharist.

A letter from Sister Blandina yesterday giving the sad news that she had an attack of "grip" which will retard her restoration to health.

We were informed last Saturday that three Italian children had been sent to the Children’s House. We hastened to investigate. It was the case of a poor woman, whose husband is in the penitentiary for life. She is struggling to support her five children. She had pawned her jewelry and furniture to buy necessaries and in trying to redeem them by working she has sent the children there temporarily. We could get homes for them in our asylums, but she wants them near her so there is no alternative, but to leave them there for the present. But we shall see that they receive assistance. Her two boys, eighteen and fifteen years old, are working, but their wages are so small they cannot do much. The boys cannot read or write. We have promised to teach them at night, after their work.

Ash Wednesday (13 February) 1907.  Mrs. Braunstein and I went visiting among the poor this morning. Our first call was at Mrs. ______ , a young married women who is struggling to meet the expenses of the house and family on eight dollars a week which her husband earns. Take out seven dollars for house rent, the husband’s two meals near his place of work, and you see there is not much left for a family of five. Mrs. Braunstein promised to get clothes for the children from one of the sewing circles, which are particularly active during Lent.

Our next visit was to Mrs. Curly, a widow. She has two sons, twenty and seventeen years of age. They know nothing about religion, nor can they read. We invited them to the Santa Maria in the evenings after their work.

The next place visited is Mrs. M. Lean. She has two large boys, not instructed; they are seventeen and fifteen. We urged them to go to Father Shee, and they promised to do so.

Our next visit was to a family by the name of Lasita. They have a nephew, seventeen years old who cannot read. We invited him to the house to teach him in the evening.

Mrs. Fantini told me some time ago, when I invited her to take part in the Santa Maria work, that it has been the dream of her life to do charity work among the poor. To-day she made her first attempt by giving her name and appointing the next day for active work.

February 21, 1907. Mrs. Fantini came according to promise, to go visiting among the poor. We visited a number of families. We heard of a poor child who was supposed to be dying and we went to see it. We asked the mother if the child had been baptized. She said “no.” When asked if she objected to having it baptized, she said she would be glad if it were baptized; and we went to see if we could get a priest form Holy Trinity Church, but no priest being at home, we went back and I baptized it. Mrs. Fantini will be a great charity worker. She takes such an interest in every thing. She was delighted with the day’s work.

Next week, she takes charge of being present at the meetings of the Juvenile Court in the interest of the Catholic children who may be summoned there.

February 22, 1907. Spent the day at St. Joseph's. The Misses Jennie Murray and Stella Williams were my companions. How pleased they were with the Mother House. Mother Mary Blanche told us that the site for the new Good Samaritan had been purchased. It is on Clifton Avenue opposite Burnet Woods, an ideal location for a hospital. It contains seven acres, but some adjoining land is available if needed.

The purchase of the old Presbyterian Hospital which was closed some time ago, is also contemplated to be used instead of Seton Hospital [in the West End] which is entirely too small. It is proposed to use the present Seton Hospital for a residence for the Sisters of the Springer Institute and also for the use of Sisters visiting or passing through the city.

February 28, 1907. The baby we baptized last week, died Sunday morning. Mrs. Dr. Flanagan gave a suit of her little girls as a shroud. Yesterday in our visits met an old fashioned Protestant who still believes that the Catholic Church forbids the reading of the Bible, and that Catholics worship the Blessed Virgin and saints instead of God. Antonio Sciarra is her husband. She gave him the Bible to read and he was converted and became a Methodist right away. We explained all her misunderstandings of the Faith. We promised to send her “Faith of Our Fathers” which she promised to read. Her children – four of them – were baptized Catholic, but she intends them to be Protestants. However, she seemed to think that she had been imposed upon in the doctrine she had been told was Catholic. I think she is partly convinced of its absurdity. One thing in particular, she believed that the belief in purgatory made Catholics bad, as they could commit any crime and still be saved by going to purgatory. Another proof that poor people have all kinds of wrong ideas about the Church, and how many souls could be saved by personal visiting, and explaining the true doctrine!

February 27, 1907. Miss Elvie Stenwer is studying Spanish; she comes about once a week. I asked her to help form a committee to visit the workhouse. She gave me the name of a friend of hers, who plays and sings; she herself is a good elocutionist. So the committee is formed as follows: Miss Mary Lienhard, Miss Elvie Stenwer and I. The next thing will be to fix upon that day most convenient for all, to go.