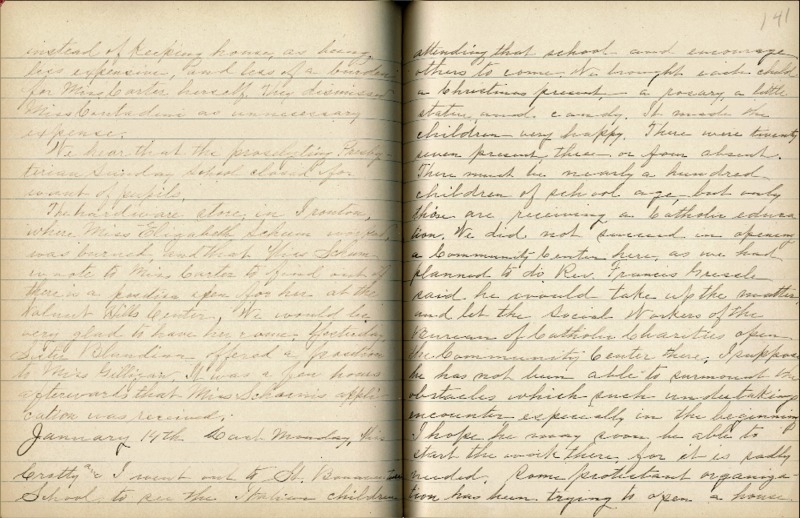 As the work of the Santa Maria expanded, the Sisters continued to blend their concern for preserving the religious and ethnic identity of Italian immigrants with social services for the urban poor.  Their energy and willingness to experiment with new ways to improve their work is evident in their purchase of an automobile, which Sister Blandina, then in her seventies, would learn to drive, challenges many gender, age, and religious stereotypes.

January 14, 1920. Last Monday Miss Crotty and I went out to St. Bonaventure School to see the Italian children attending that school and encourage others to come.  We brought each child a Christmas present -- a rosary, a little statue and candy.  It made the children very happy. There were twenty-seven present, three or four absent.  There must be nearly a hundred children of school age, but only these are receiving a Catholic education.  We did not succeed in opening a Community Center here, as we had planned to do.  Rev. Frances Gressle said he would take up the matter and let the Social Workers of the Bureau of Catholic Charities open the Community Center there.  I suppose he has not been able to surmount the obstacles which such undertakings encounter, especially in the beginning.  I hope he may soon be able to start the work there, for it is sadly needed.  Some Protestant organization has been trying to open a house there and was prevented on account of Father Gressle’s first claim.

Wouldn’t I just love to make a beginning right away!  For our good God always sends help when you begin a work for Him.

The very remark Mr. Charles Ginocchio made the last time we met him was, “Fairmount is the place where a Community Center for the Italians is needed.  There’s where you can do much good!”

Miss Emily Hyde arrived this morning from Colorado Springs, Colo.  She is going to enter the Novitiate at Saint Joseph’s.  She is Sister Rose Alexine’s candidate.

Yesterday Sister Blandina purchased an auto.  It is considered a first-class one.  It is a Ford, but has parts replaced by better makes of machines.  It has been used only a few times.  The owner ordered it months ago, but orders are delayed, so he received it only a few weeks ago.  He has since purchased a residence and needs the money to complete the payment on it.  He will sell the machine for one thousand fifty dollars, which is about a hundred less than it cost him. The advantage of taking this one is that the owner has fitted it up for his own use, with many additions which we would not even know how to procure.  Sister Blandina and Miss Catherine Crotty, our Field Agent, will learn how to operate it.  The owner has promised to teach them how.  With an auto we shall be able to do social work which would otherwise be left undone.  We have been receiving donations for the purchase of an auto for a long time.

Rose Dalseno and Rose Andriano, who were absent Monday when we visited St. Bonaventure School, came from Seton Hospital where they had been for treatment for the eyes – came on a visit rather to get a Christmas gift, which I was glad to give them.