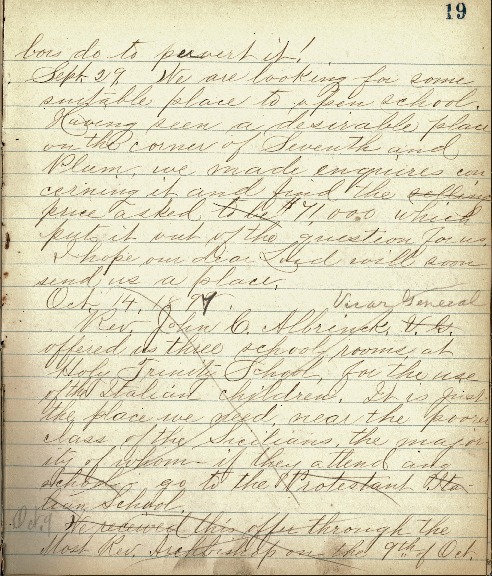 One of the first activities initiated by Cincinnati Sisters of Charity Justina and Blandina Segale when they founded the Santa Maria Institute was a school for Italian children in the basement of the Archdiocese cathedral school, the Springer Institute. Not only did the religious goal of this Catholic settlement house contrast to the nonsectarian approach of settlements created by middle-class laywomen in the Progressive Era, attitudes about immigrants differed as well.[i] The children were energetic and behaved poorly.  An experienced teacher, and an Italian immigrant who had grown up in urban Cincinnati, Sister Justina seemed more amused than troubled by her unruly students.

We received this offer through the Most Rev. Archbishop on the 9th of Oct., which was on a Saturday; on Monday following, Oct.11, we opened school with twenty-three pupils; today we have fifty.

I cannot give a just idea of the children, I am afraid. They are as restless as their own Etna.

The first morning in the church was a memorable one. The children evidently were not accustomed to attend Mass. Some were talking, others laughing or eating and gazing around to see the place and the people.

Such a pitiable class of children you can hardly imagine.

Our first day in school is indelibly marked in our memory. As there were so few children, we took them all into one room. They talked, laughed, cried, screamed, ran, as if they were at a picnic. Sister Blandina and I looked at each other in utter amazement, and seeing that we could do nothing to bring them to order, we looked at the comical side of the picture and laughed till the tears ran down our cheeks.