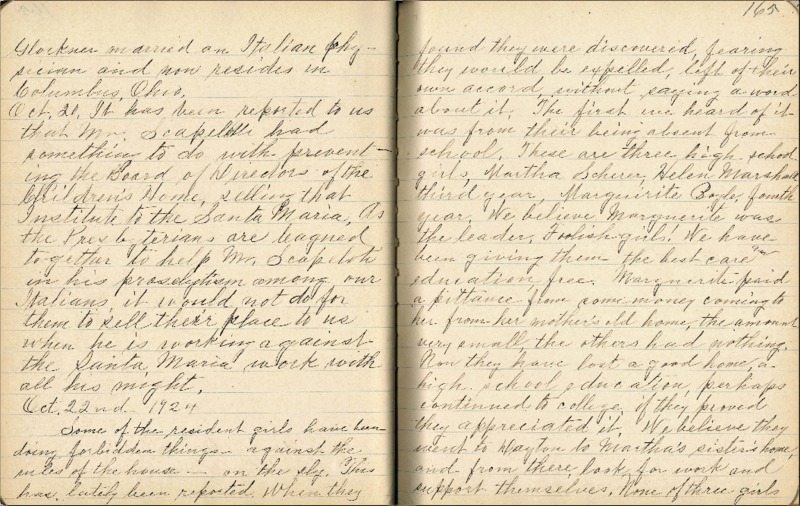 The Santa Maria’s residence for young women enabled them to obtain education equipping them for economic self-sufficiency.  Sharing the residents’ working-class immigrant roots, the Sisters understood the social temptations they faced.

October 22, 1924. Some of the resident girls have been doing forbidden things -- against the rules of the house -- on the sly. This has lately been reported. When they found they were discovered, fearing they would be expelled, left of their own accord without saying a word about it. The first we heard of it was from their being absent from school. These are three high school girls: Martha Scherer, Helen Marshall, third year; Marguerite Boyle, fourth year. We believe Marguerite was the leader. Foolish girls! We have been giving them the best care and education, free. Marguerite paid a pittance from some money coming to her from her mother’s old home, the amount very small, the others had nothing. Now they have lost a good home, a high school education, perhaps continued to college if they proved they appreciated it. We believe they went to Dayton to Martha’s sister’s home, and from there, look for work and support themselves. None of three girls have a home. Martha is an orphan, has been with us about seven years; Helen’s mother is not able to support herself. She has been here about seven years. Marguerite is also an orphan, but she has an aunt who long ago positively refused to keep her.

October 28, 1924. We find the three girls did not go to Dayton, but remained in the city. They were seen at St. Xavier Church last Sunday Mass. This morning Marguerite was seen on the street, presumably, going to dinner from work.

At the Institute it was reported that after they retired for the night, they got up when everybody was asleep, and the three together went out, and did not return till near mid-night, having a nice time, as they called it. After investigation, it was found to be true. When the girls discovered that they were found out, they thought it better to leave before being called to account. The girls are well instructed and we believe they can take care of themselves, work and support themselves. But the pity of it all!

Sisters Justina, Blandina, and the Work of the Santa Maria Institute: Thought Questions →