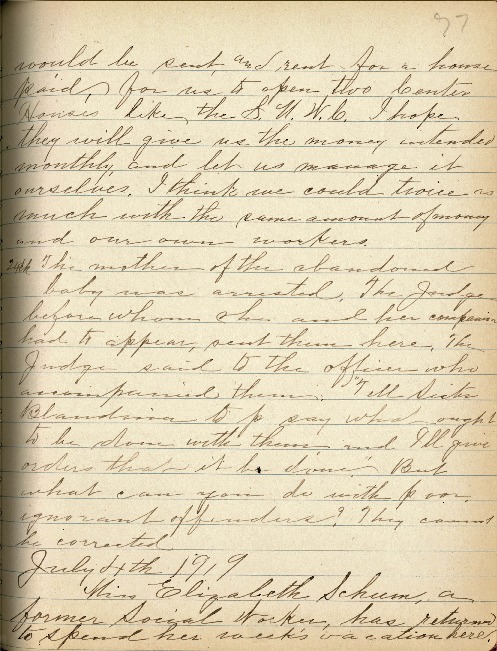 The Sisters encouraged young, Catholic lay women to assist them in their work and were supportive of women’s employment in social services.  The Santa Maria included a residence for girls and young women, which near the end of the Progressive Era, specialized in caring for teenagers. The Sisters’ response to four young girls who resisted being transferred from the Santa Maria’s residence to the Sisters of Charity orphanage, reveals their admiration for girls’ and young women’s independence.

The Misses Elizabeth Schum, Mary Galante, Nettie Cordano and Rose Berry are making a three-day retreat at the Academy of the Sacred Heart, Clifton.

On the 2nd, Miss Catherine Ininlan from Camp Jesup came to spend her vacation and assist in social work.

Yesterday another Miss Quinlan from Indianapolis came on a visit to obtain information in social work.  She represents the Daughters of Isabella, who are engaged in various benevolent works.  We encouraged her to induce the Society to take up the counteracting of the proselytism carried on among foreigners, particularly Italians.  The Society intends to open a Day Nursery and she visited ours, the Santo Bambino [Holy Child], to obtain information.

Miss Elizabeth Hanlon has left for Graymoor, New York, where she will take a literary position on the “Lamp.”  Miss Hanlon is quite deaf; she found it hard to work with children and the children found it hard to work with her.  This offer of a position to which her deafness will be no hindrance is surely one of God’s providential acts, and oh how grateful she was for it!  Miss Hanlon has held important public school positions before losing her hearing.

We have only ten girls left in the house – Janet and Rose Flick, Carmela Damico and Elizabeth Paolelli have gone home not to return.  The little ones were dismissed, some going to relatives, others to St. Joseph Orphanage.  We found we did not have a responsible person to be with them all the time, consequently, we could not give them the attention they ought to have and we shall have more time for other works.

Yesterday the Red Cross sent a woman with three children to remain here till they could locate her husband who should have met her here.  One of the children, a girl of about seven years, is a striking example of want of discipline.  She wanted something which her mother could not or would not give her.  The little girl, in anger, hit her head against the bed post and made a great gash in her forehead, at the same time crying and yelling.  She would not let any one dress the wound, and when it was dressed by force she tore the plaster away.  Sister Blandina told her mother to let the girl alone and she would come to her senses, which eventually she did.

Matilda Gruener went to take a place yesterday with Miss Callahan.  She is to receive five dollars a week: two and a half of which she is to deposit, the other, to spend for her needs. She is to report here monthly.  Clara and Teresa Galante, Mary Chiricosti and Elizabeth Ciccherelli were taken to the Orphanage; Mary Fazzio went to her mother’s, so did Louise Mc Glassan.

July 7th, 1919. Yesterday our girls – ten in number – and ten girls from the neighborhood, with three ladies to take charge of them, went to the Fresh Air Farm, Terrace Park, for a two weeks’ outing.

In the evening our four little girls whom we had sent out to the Orphanage came back to us.  They ran away from the Orphanage.  The little girls are:  Clara Galante, ten years old; Teresa Galante, about seven; Mary Chiricosti, eight; Elizabeth Ciccherelli, nine; Teresa, the youngest, was the promoter and leader.  A sad, woe-begone group of girls they certainly were.  They had walked all the way; they were exhausted, dirty and hungry.  Two of the little girls carried a bundle consisting of a pair of stockings and a prayer book.  Elizabeth went to her father’s house; Mary to her mother’s; Clara and Teresa came here and threw themselves into the arms of the first Sister they met, and pleaded, “Please let us stay here, oh! please don’t send us back!”  By this time they must have realized that little runaways would not be welcome, but the sight of the trembling little culprits in their sad plight would move a heart of stone, let alone the hearts of the Sisters who loved them.  So the correction for disobedience in running away was deferred.  After eating a hearty supper – they were famishing -- and taking a bath, and got into their clean beds, they looked more like themselves and then they told their story.  “How did you find the way?” “Oh! we crossed the bridge, and then we kept straight on and we got here.  We saw two policemen and we got afraid, all but Teresa, and she straightened herself up, and she said, ‘I’m not afraid’.”  In the morning they received their merited lecture, I gave each one a pretty bag containing two balls of crochet cotton, two center pieces and a crochet needle, and they were smiling and happy ready to go back when they found there was no alternative.  A Sister was sent with them to the Orphanage.  “Now, you’ll be good, won’t you?” asked one of the Sisters.  They all smiled and said, “Yes,” except the youngest, and she smiled too but shook her head, “No.”