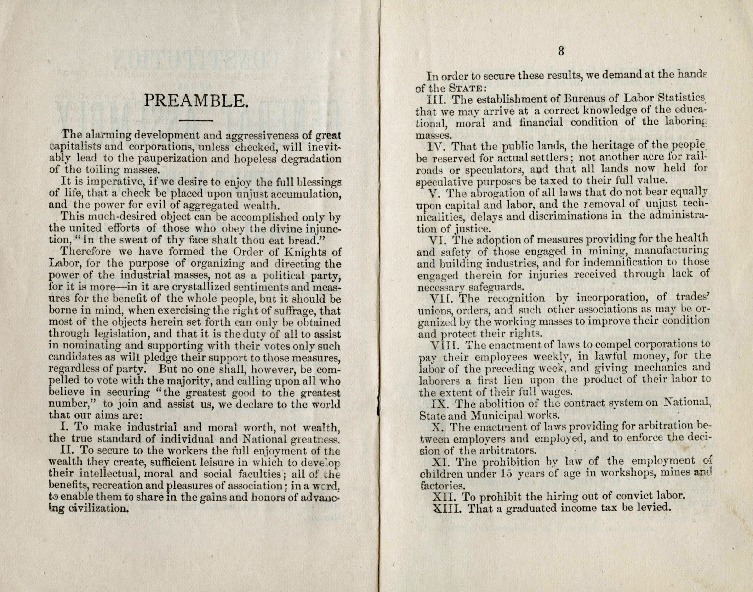 Preamble of the Constitution of the Knights of Labor, 1885

The Knights of Labor constitution sets forth the broad aims and rules for governance of the organization on the general, district, and local assembly levels. The document's eighty-one pages explain procedures for admission of new members, the duties of officers, as well as practicalities like doling out insurance benefits to members. Its rules and language reflect the institutional practices and currents of thought among laborers in the late nineteenth century. A clear hierarchy of officers and distinct responsibilities is clearly outlined, as are meeting and election protocols. The Knights of Labor put more than their rules for governance into their constitution, however. The document is steeped in the urgency and confidence with which the Knights went about organizing to promote higher wages, shorter work days, equal pay for equal work, and other labor reforms.

He especially admired the Congress' goal of organizing by industry, rather than by particular trade, and its emphasis on making "industrial, moral and social worth-not wealth-the true standard of individual and national greatness," as the Congress' preamble stated. Schilling became involved in the Knights of Labor too, and with Powderly, headed the Knights' committee on the constitution. When the two men presented the preamble and platform of Industrial Congress to the first General Assembly of the Knights in Reading, Pennsylvania in 1878, it was accepted almost intact.