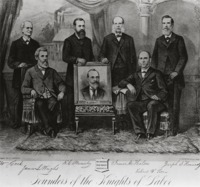 The Founders of the Knights of Labor, 1886

When Uriah Stephens and eight fellow garment cutters founded the "Noble and Holy Order of the Knights of Labor" in 1869, they set their organization in the trappings of the broader culture of which they were a part. Stephens was a member of several fraternal societies, including the Freemasons, the Odd Fellows, and the Knights of Pythias, and practices drawn from these societies found their way into the rituals of the Knights of Labor. Fraternal organizations were extremely popular in the late nineteenth century. Members of these societies of male friendship practiced secret rituals as individuals were initiated and advanced through successive levels of membership in the order. In the late-nineteenth century, fraternal orders were extraordinarily popular in the United States. Historian Mark Carnes notes that there were more than 300 fraternal orders by 1900, with total fraternal membership exceeding 6 million. With a national population of about 76 million, that means that nearly 8% of Americans were in fraternal societies. Fraternal societies attracted members for many reasons: exotic rituals that made life more interesting, a strong sense of community, and networks that could serve members in the broader community.

The Knights, however, were not only a fraternity, they were a labor organization that advocated changes many Americans perceived as radical. The political and economic goals, along with the secrecy of the order, made it suspect among certain groups of Americans for two main reasons. 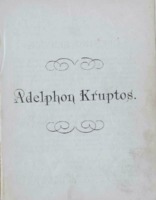 Founders of the Knights of Labor

Second, the Catholic Church objected to the secrecy of the order-a significant objection in that many of the Knights, including Powderly himself, were Catholic. Already hesitant to throw their support behind the Knights due to fears of labor violence and possible anti-religious socialist leanings among members, the oath of secrecy taken by members further irked church authorities. In secret societies evil activities, it was thought, could be conducted and flourish outside the corrective eye of the Church. (see Pastoral Letter, 1884 for the church's position on secret societies) The Knights did in fact conduct their activities in secret, indeed, they kept their very name secret for a time, but this was because they feared that employers would discover Knights working in their factories, mines, and shops and fire them.

Terence Powderly realized that secrecy was a liability for the Knights, and at his urging, the order officially dropped much of its secret ritual on January 1, 1882. Some local groups, however, found the secret rituals meaningful and quietly continued practicing them.