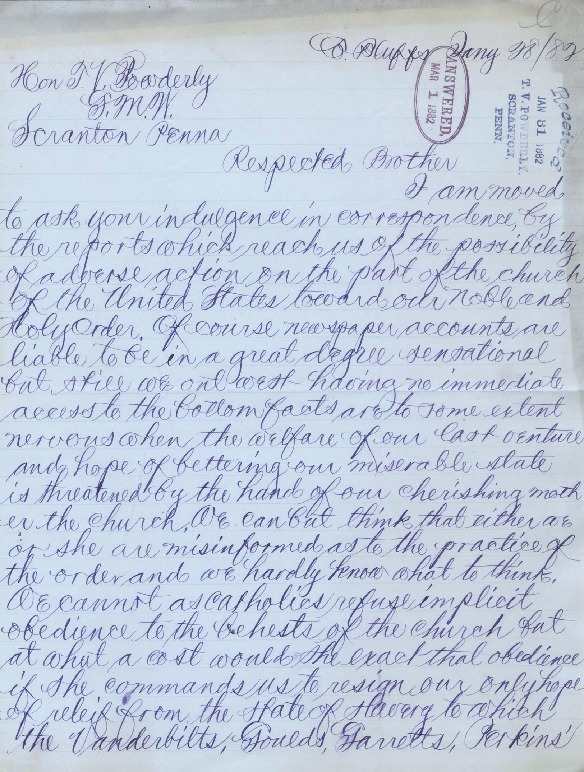 The Knights of Labor expanded during an age of massive industrial expansion, rapid technological development, and financial ingenuity. Mark Twain coined the name "Gilded Age" to describe this period, suggesting that it was characterized by displays of wealth that were showy on the outside, but corrupt and worthless on the inside. Whether or not this view of the age was accurate, the name stuck.

One of the Gilded Age's chief characteristics was the emergence of noticeable distinctions between rich and poor. For many working-class laborers, the glaring differences between rich and poor created the sense of injustice that led to the formation of unions like the Knights. Newspaper reports of the lavish lifestyles of the rich and famous left many American feeling angry about the vast gulf between owners of industry and the poor working class. What right did wealthy industrialists-sometimes referred to unflatteringly as "robber barons"-have to build enormous mansions when the people that worked in their factories crammed entire families into dirty tenement hovels?

Not everyone felt this same sense of injustice. In fact, many blamed industrial-age poverty on the poor themselves. New philosophies emerged to explain the changing social and economic structures of the period. The most popular among the upper classes was known as "Social Darwinism," as it claimed that Darwin's theory of the survival of the fittest applied to economic and social relationships. In other words, Social Darwinists believed that superior individuals rose to the top of society, while the inferior sank into poverty and obscurity. Social Darwinism was popular in part because it complemented strongly held beliefs about American opportunity. The idea that society's benefits and recognition go to its fittest and most ingenious members works well, even supports, the American idea that individual hard work is rewarded with success.

Many clung to the more general belief, moreover, that the American dream was within anyone's reach, one merely had to be thrifty, watch for opportunity, and hope for a little luck to make it big. Few wanted to believe that the American economic system bred impoverishment. Few wanted to face the fact that extremely wealth was often bought at the expense of thousands of hardworking folks earning unlivable wages performing difficult and monotonous work day in and day out. Yet the fact was that 11 million of the 12 million families living in the United States in 1890 earned less than $1200 per year. The average annual income of those earning below $1200 was $380-well below the poverty line.

Believers in the Social Darwinist theories often grew angry with labor's spokespeople, particularly when they accused rich corporate figures of mistreating their workers. American Gilded Age society was often polarized, with the supporters of corporate growth and supporters of labor rights opposing each other. Hence the violence between labor and corporate power, with violent labor unrest plaguing the country in the 1870s and 1880s. Nearly ten thousand strikes and lockouts took place in the 1880s. In 1886, the year this letter was written, workers struck nationally for a reduction of the workday from twelve hours to eight.

This letter suggests how views of how wealth was created shaped the opinions of the Knights of labor and of Terence Powderly.