Frederick Turner, Secretary-Treasurer of the KoL

As the Knights expanded in membership throughout the early 1880s, reaching about 730,000 members in 1886, they were given more and more scrutiny by the press, the public, and the Catholic Church, in particular, since a large number of Knights were Catholic. New York, Chicago, Baltimore, Pittsburgh, and Boston all saw the rise of hundreds of locals. New locals also mushroomed in 3,000 locations where the population was under 1,000. Finally, the Knights spilled outside the borders of the United States, with organizations founded in England, Ireland, Belgium, Australia, New Zealand, and Canada.

Indeed, it was an event related to a group of Canadian Knights that touched off a controversy between the order and the Catholic Church in the United States. In 1884, Eleazar Taschereau, the Archbishop of Quebec, invoked the Church's ban on secret societies, a restriction that dated back to the 1734 condemnation of the Freemasons, to condemn the Knights in Canada. Condemnation of the Knights would mean that Catholic workers that joined the order would lose their good standing in the Church-baptism of their children, receiving communion, marriage and other sacraments would all be jeopardized by their membership in the order. Some Bishops in the United States, moreover, believed that Taschereau's condemnation was correct and they followed his lead, affirming in their own religious jurisdictions his ban on the Knights in Quebec. Bishop James Healy of Portland, Maine, for example, published Taschereau's ban and forbade Knights in his diocese from receiving the sacraments.

Taschereau's ruling would be challenged, but it caused considerable hand-wringing among church authorities that thought the order was doing good work, and among many Catholic Knights, including Terence Powderly.

In this letter to fellow Knight Frederick Turner written in 1885, Powderly confesses some of his frustrations with those Catholics whose actions thwarted the progress of the Knights. 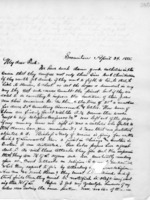