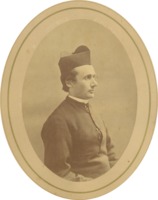 If it was true that many powerful Catholics disapproved of the goals of the Knights of Labor, it was equally true that the order had its prominent supporters. One of those supporters was Bishop of Richmond Virginia John Keane. When the Knights held their General Assembly in Richmond in 1886, Cardinal Taschereau of Quebec, Canada had by then secured a second condemnation of the Knights by authorities in Rome.

This did not stop some American church leaders, however, from expressing approval of the order, indeed, Taschereau's work against the Knights in Canada caused some church authorities in the United States to attempt to clarify that the condemnation did not necessarily apply outside of Canada.

One of these supporters was Bishop Keane. When asked by a reporter about the Knights shortly before they held their meeting in Richmond, Keane expressed optimism about their work. Powderly asked Keane to put his positive thoughts on the Knights into writing, and the letter reproduced here, a kind of "letter of recommendation" for the Knights was the result.