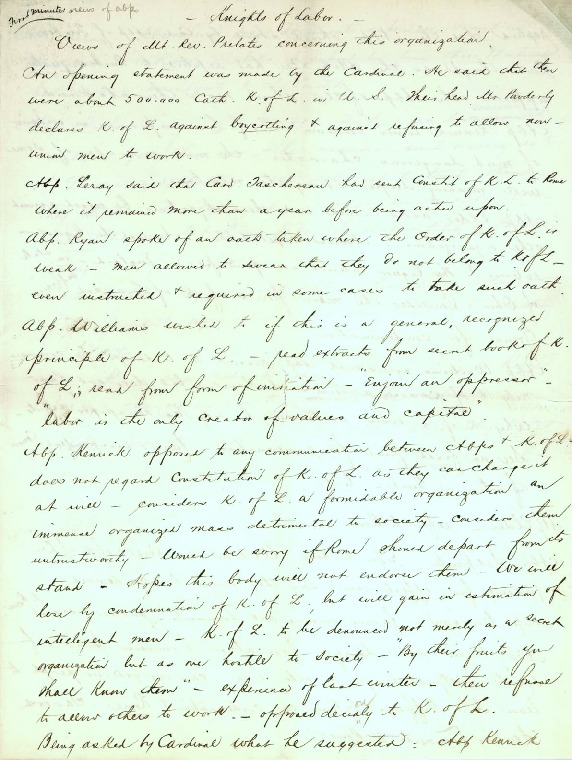 The widespread publication of the condemnation galvanized American church authorities fearing the demise of the Knights in the United States. Key among the Knights supporters was James Cardinal Gibbons, the powerful archbishop of Baltimore, who, in fact, did not silence Father Schmitt in the wake of Mayer's allegations of the priest causing labor unrest in Western Maryland's coal region. Gibbons sympathized with the Knights of Labor and felt that condemning the order in the United States would be very destructive to not only labor, but the church as a whole, as it might cause an exodus of working class Catholics. Gibbons realized that some priests and prelates would have to be assured that the order would abandon all secrecy, and he and Terence Powderly agreed that the labor leader would make any changes to the Knights' constitution he had to keep the order on the good side of the church.

Gibbons went about reviewing the Knights' constitution and organized a meeting of archbishops in Baltimore to discuss the matter, among other things. Held in October, 1886, the meeting was attended by nine of the twelve United States archbishops. Opening the meeting with a statement that the Knights of Labor possessed half-a-million members and that Powderly had assured him of the order's non-radical nature, Gibbons opened the meeting up for discussion by the attendees.

Two archbishops, Peter Kenrick of St. Louis, Missouri, and John Salpointe of Santa Fe, New Mexico, favored condemnation. Archbishop Michael Corrigan of New York was unfriendly to the Knights, but fell short of favoring condemnation of the order. On the final vote, all of the archbishops except Kenrick and Salpointe were against condemnation. But since they were not unanimous, by rule the case had to be referred to Rome for a final decision.