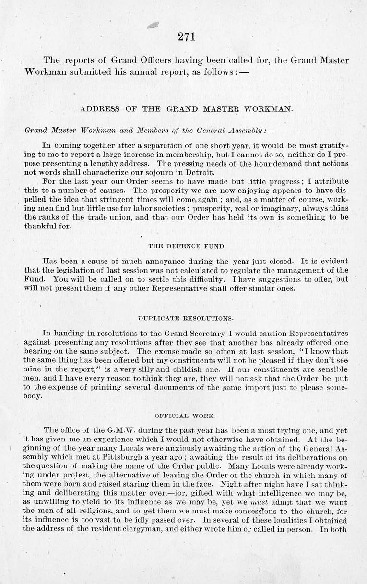 Proceedings of the Knights of Labor General Assembly, Sept. 6-10, 1881

On the first of January, 1878, thirty-three delegates met in Reading, Pennsylvania for the first meeting of the General Assembly (GA) of the Knights of Labor. At this meeting, the delegates created the structure of the national organization, almost ten years after its founding in Philadelphia. The delegates were well aware that the Knights' greatest strength lay in the organization and enthusiasm of its local members. They knew members would resist attempts at asserting too much control over local affairs. So they were careful to recognize local power in their activities.

At the Reading meeting, the constitution was adopted and a slate of officers were elected. Uriah Stephens was elected Grand Master Workman (the Knights leaders' title would later change to General Master Workman), the organization's head. The approved constitution had three parts, one dealing with each level of authority, local, district, and national. A system of taxes, initiation fees, and general tax on locals were also agreed upon.

The pattern set for the GA to meet to conduct business related to national Knights affairs, it would meet again several times over the next few years. From each GA meeting followed proceedings, intended to inform the membership on what had transpired at the general meeting.

By the time of the Detroit, Michigan GA meeting of 1881, Powderly had been serving as the Knights' head for about two years. Controversy swirled around the meeting, threatening to divide the order into factions. The issue was that of whether to make the name of the order public. A number of priests and other church authorities had been expressing opposition to the order, claiming that the secret rituals, the oath, and the refusal of the Knights to name themselves in public violated church doctrines against secret societies. In some places, Catholics that had joined the order had been barred from receiving sacraments, in others, priest opposition killed local assemblies.

Powderly, himself Catholic, believed that it was time to emphasize the order's labor goals and remove the secrecy-he was aware that the church could do serious damage to the order's membership, more damage than ending secrecy would. Powderly successfully lobbied to end the practice of keeping the order's name secret, and the order went public on January 1, 1882. Other aspects of secrecy would be modified later, though the success of later measures would depend on the local assemblies, some of which wanted to keep some aspects of the order secret.

These pages from the proceedings of the Detroit, Michigan General Assembly meeting, held September 6-10, 1881, contain the text of the address Powderly gave the meeting.

← Journal of United Labor
Next Page: