Catholics and Charity in the United States 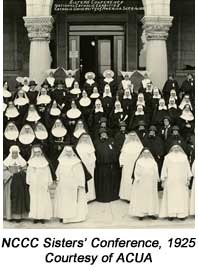 Catholics encountered a Protestant-dominated system of charity in the early nineteenth-century United States. Comprised of largely upper-class Protestants, this system was made up of local networks of charitable institutions whose practitioners wove their views of public morality into work on behalf of the impoverished. These largely volunteer-staffed networks aided, yet also sought to control, the destitute among them.

The post-Civil War years saw the influx of millions of immigrants into the U.S., many of them in need of charitable services. Thanks largely to mass migration from Europe throughout the nineteenth century there were over 16,363,000 Catholics in the U.S. by 1910. As the numbers of those in need of a range of charitable services skyrocketed, many Americans called for reforms in public welfare practice. They believed that local and state regulation and control of charity would improve public welfare services, and pushed for such reforms. As a result, many U.S. cities and states saw the establishment of independent boards of public charity, and public poorhouses were replaced with more specialized institutions aimed at helping groups with specific needs, such as the mentally ill and dependent children. Additionally, cities and states began funding private institutions that had arisen to address deficiencies in outdoor relief (assistance provided without the requirement that the recipient enter an institution). Catholics, who dominated among the ranks of impoverished immigrants at this time, became the major recipients of aid in this changing system of charity. Though the Church operated an extensive system of social welfare, the Catholic poor were so numerous that non-Catholic institutions were essential to meeting their needs in the late-nineteenth and early-twentieth centuries.

To try to address address the problem of the burgeoning poor among their co-religionists, Catholic charity workers intensified their organizational efforts. During the nineteenth century, local charitable groups such as the Ladies of Charity and the St. Vincent de Paul Society, founded in France, appeared in cities throughout the U.S. Both organizations established parish and diocesan level organizations to serve the poor locally. Catholics generally followed Protestant patterns of charity, remaining local and voluntary in their effort. Catholics, however, had the invaluable services of religious orders, and it was largely female religious that carried much of the work of caring for the poor in the Catholic institutional network. They staffed orphanages, hospitals, and asylums throughout the U.S. Of central concern at the time were orphaned Catholic children, whom Catholics feared would lose their faith if raised in Protestant institutions and families. As a result of the interest in saving Catholic children from Protestant proselytizers, much of Catholic charitable effort would center on needy children.  1

The National Conference of Catholic Charities →