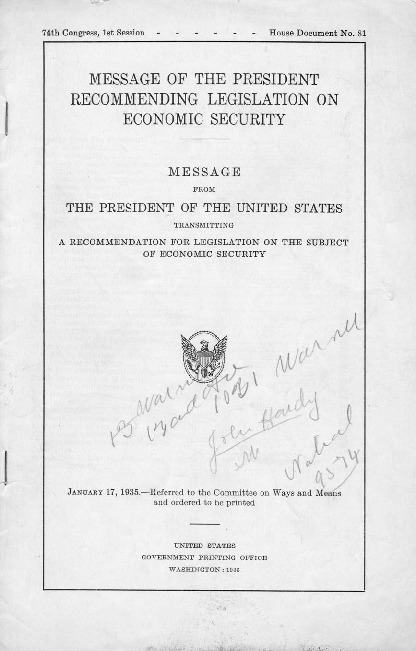 Message of the President Recommending Legislation on Economic Security

The Committee on Economic Security (CES) had been created by President Roosevelt on June 29, 1934; it first met on August 13. With the help of an Advisory Council appointed in early November, the CES was responsible for "analyz[ing] the hazards against which special measures of security are necessary" and making recommendations to the president for "measures designed as safeguards against these hazards." By mid-January 1935, the CES had completed its work and made its report to Roosevelt. Despite the speed with which the report was prepared, it contained the outlines of a fairly comprehensive program of social legislation. It recommended that social welfare programs should maintain principles of economic self-sufficiency and local administration. That is, the programs should be self-sustaining (not funded through general taxes) and managed by the states. The Federal government's role would be limited to control of funds, in order to ensure states' compliance with Federal regulations. Roosevelt took the recommendations of the CES and embodied them in the Economic Security Bill, which was introduced into Congress on January 17. This pamphlet, which served as Roosevelt's official report to Congress and also as a reprint of the CES report, was published to coincide with the introduction of the new economic legislation.

Memoranda for Meeting of the Diocesan Directors of Catholic Charities; Minutes of the Meeting, January 29, 1935 →