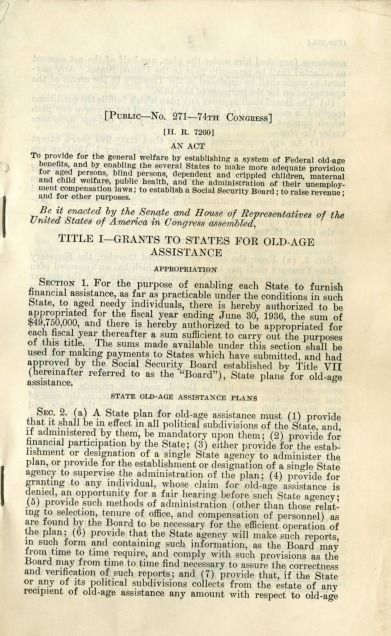 Debate on the House version of the Social Security Act began on April 11, 1935. Eight days later, the vote was taken: 372 voted for the bill, 33 voted against. The Senate version of the bill was approved by the Finance Committee on May 13, and introduced in the Senate on June 12 for debate. A week later, the Senate vote on the bill counted 77 yeas and 6 nays, with 12 not voting. A Conference Committee was then established to reconcile the differences between the House and Senate versions of the bill. On August 8, the House of Representatives made a final vote to favor of the bill, and the Senate gave its final approval the next day. The Act was signed into law by President Roosevelt on August 14, just eight months after the initial report of the Committee on Economic Security.

"Summary of Provisions of the Social Security Act Relating to Federal Grants to States," August 14, 1935. →