American Catholic History Classroom > Exhibits > Catholics and Social Security > Documents > Confidential Memorandum Prepared for the Committee on Policies and Resolutions of the NCCC, Bulletin No. 7, March 28, 1935

Confidential Memorandum Prepared for the Committee on Policies and Resolutions of the NCCC, Bulletin No. 7, March 28, 1935 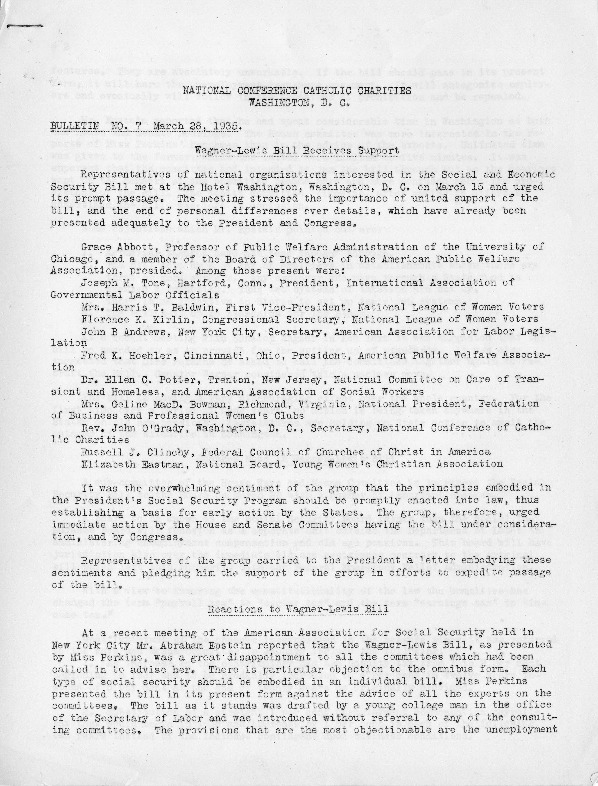 The NCCC's Committee on Policies and Resolutions continued to publish regular bulletins in order to advise its members on current events and discussions concerning social and economic topics. This bulletin from March is entirely occupied with the continuing debates over the social security bill, which was also known as the Wagner-Lewis bill. In addition, the bulletin reports on legislative advancements: the states of Utah and Washington had both passed new unemployment compensation laws which had recently come into effect. The bulletin illustrates the deep interest of the NCCC leaders in the pressing political questions of the day, and their continuing involvement in the social security debates.

← John O'Grady, Letter to the Diocesan Directors, February 9, 1935
Next Page:

Statement of the Diocesan Directors of Catholic Charities of the United States Representing the NCCC in Regard to the Social Security Bill, ca. 1935 →