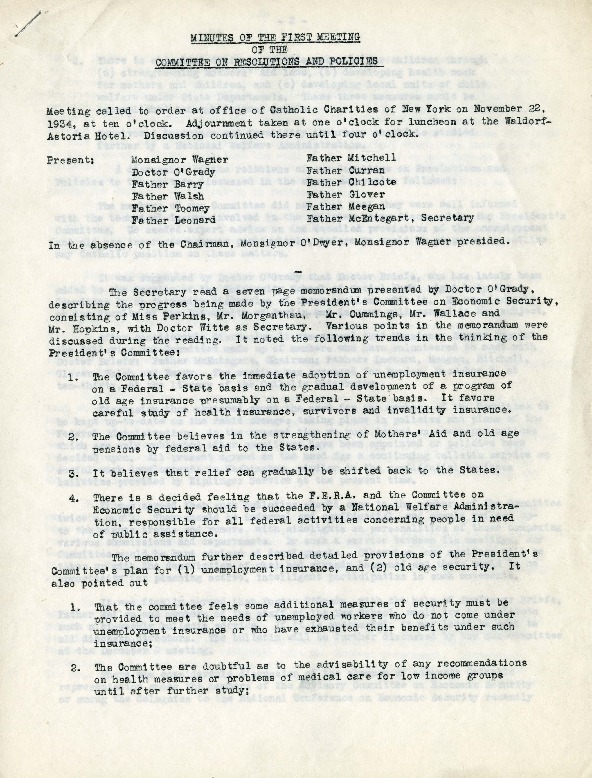 In June 1934, President Franklin Roosevelt appointed a special Committee on Economic Security (CES), whose purpose was to make recommendations on proposals which would promote greater economic security. The Committee was composed of five cabinet members, under the leadership of Secretary of Labor Frances Perkins, as well as a number of nationally-recognized experts in field of social work who served as advisors to the committee. Msgr. John O'Grady, the head of the NCCC, was among the influential advisors who aided the CES in drafting the Social Security bill.

In November, the National Conference of Catholic Charities formed a new internal committee whose purpose was to lobby for acceptable language in the new bill: this is the beginning of the NCCC's active organizational involvement in shaping of the Social Security Act of 1935. The first document presented here, written by O'Grady, summarizes the aims of the President's Committee on Economic Security and poses questions for discussion at the first meeting of the new NCCC committee. It represents O'Grady's attempt to get input from the diocesan-level directors of Catholic charities so that any recommendations he made to the CES would reflect a Catholic perspective on social welfare. The second document is the minutes of that first meeting, recording the discussion that ensued and the diocesan directors' perspective on the need for federal social legislation.

Memorandum on Questions for Discussion by the Continuing Committe; Minutes of the Meeting, Dec. 3, 1934 →