American Catholic History Classroom > Exhibits > Catholics and Social Security > Documents > John O'Grady, "Statement to be issued by the Directors of Catholic Charities at the close of their annual meeting in Peoria," September 21, 1935

John O'Grady, "Statement to be issued by the Directors of Catholic Charities at the close of their annual meeting in Peoria," September 21, 1935 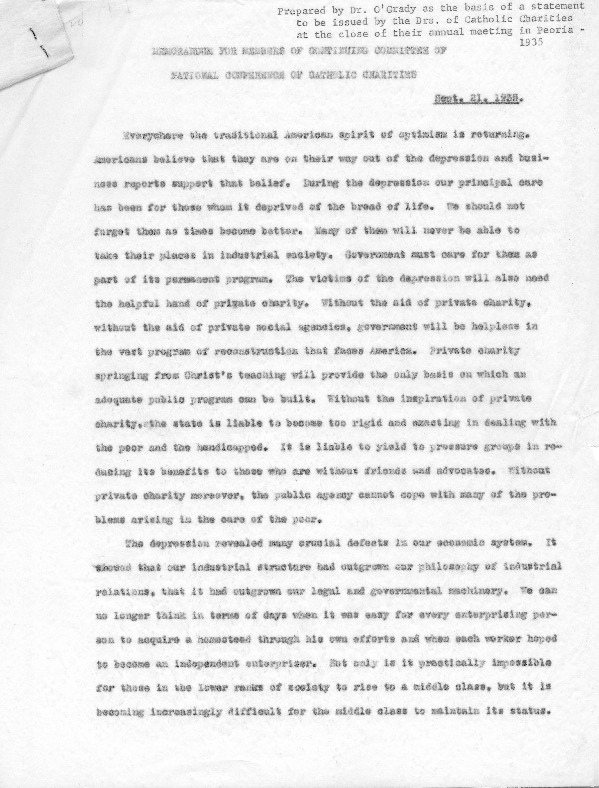 Statement of the Directors of Catholic Charities on SSA

The Diocesan Directors of the National Conference of Catholic Charities gather in Peoria, Illinois in September, 1935 for their annual meeting. They had an eventful year to look back on as well as new problems to consider for the future. They had witnessed the passing of a monumental piece of legislation that enacted of some their long-held goals. This triumph, however, was tempered by the on-going difficulties of a nation still struggling to recover from one of the worst economic depressions it had ever seen. John O'Grady, addressing the gathering, spoke of a "spirit of optimism" throughout the country, as people hoped that the Social Security Act would provide real aid and assistance. O'Grady also cautioned, however, that genuine charity for the poor should not be forgotten under improved circumstances. This is a copy of his speech, and reflects the mixed feelings of many proponents of social welfare legislation following the passage of the Social Security Act.

← "Summary of Provisions of the Social Security Act Relating to Federal Grants to States," August 14, 1935.
Next Page: