“On Race Relations and Poverty”; Letter of Matthew Ahmann to Bishop Paul Tanner 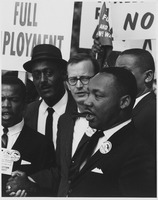 By the mid-to-late-1960s, the Church in America had made clear its stand for racial equality, even if not every local leader or member had the same conviction. However, the National Conference of Catholic Bishops (which succeeded the National Catholic Welfare Conference) felt that another statement was necessary by 1966 stating the hierarchy’s position on racial issues due to heightened tensions in the nation at the time. Racial riots had taken place in numerous cities, the Mississippi Freedom Summer had taken place just two years earlier (during which three civil rights activists were murdered), and numerous incidents of segregationists battling federal mandates for equality.

"On Race Relations and Poverty"
Courtesy of ACUA

The pastoral statement titled “On Race Relations and Poverty” acknowledged the progress made in civil rights legislation and anti-poverty programs in the prior years. However, the bishops noted that “civil strife is an ever-present danger,” and that “the great task of changing the hearts of men on the subject of equal rights for all requires more than laws and programs. It needs above all a true sense of neighborliness, based upon a religiously inspired conviction that all men are equal before God and that all should be welcomed in our midst.” To meet this goal, the bishops proposed several courses of action, including opening lines of dialogue between those of status in the nation of those who were less fortunate; and attacking poverty by addressing inequalities in education, providing quality economic assistance, providing more job opportunities, and addressing housing problems.

It was a statement that quickly brought the praise of the law organization National Catholic Conference for Interracial Justice. Mathew Ahmann, executive director of the NCCIJ, thanked the bishops for “the concrete way in which the grave needs of minority Americans were expressed.” He went on to laud the statement for its stance on increasing Catholic leadership in housing, education, and jobs, as well as the NCCB’s endorsement of affirmative action by employers. Ahmann ended with an appeal for support of the NCCIJ by the bishops.

1. With several pastoral statements being made in the past, why was it important for the bishops to issue a statement in 1966?

2. According to the bishops, why was poverty included in a statement on race?

3. Why was it significant that the National Catholic Conference for Interracial Justice voiced its support for “On Race Relations and Poverty?”