"Racial Discrimination and the Christian Conscience" 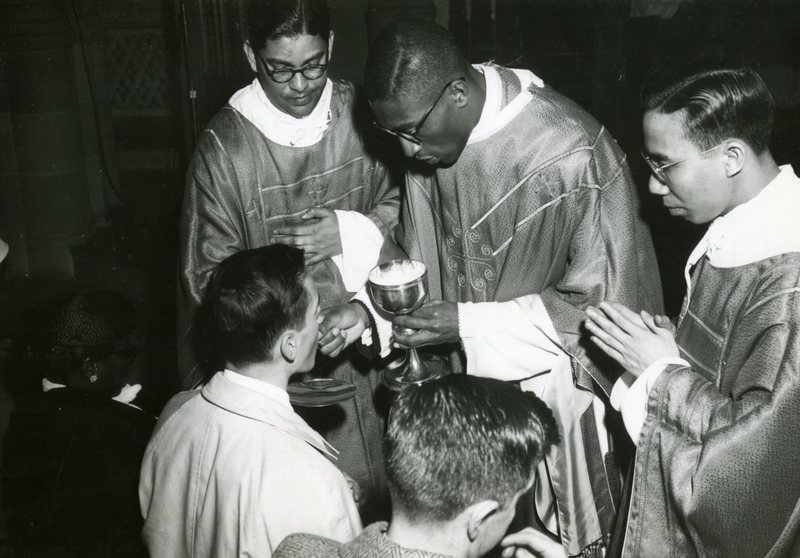 With local Church leaders taking a stand for civil rights in areas across the country and SAD doing the same on a national level, all that was left was for the body of American leaders to offer an authoritative stand as well. Statements by the National Catholic Welfare Conference (the de facto body of the American bishops, later renamed the U.S. Conference of Catholic Bishops) had been issued before in 1942 and 1943, wherein the bishops called for equality across the board for African Americans. A third statement, issued post-World War II, was deemed necessary by 1958. While acknowledging that “considerable progress was made” toward the goal of civil rights and equality in the intervening years between 1943 and 1958, the country “now stands divided by the problem compulsory segregation of the races and the opposing demand for racial justice.” 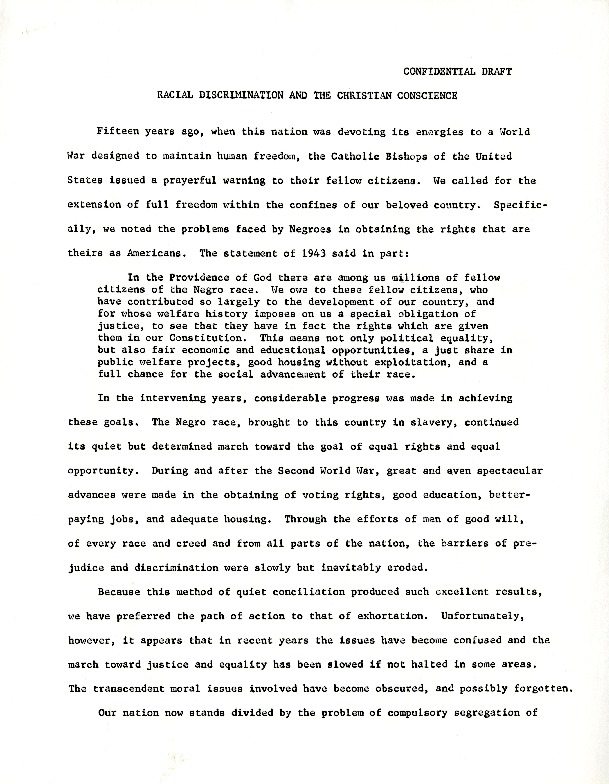 "Racial Discrimination and
the Christian Conscience"
Courtesy of ACUA

Describing the issue of racism as a moral and religious question, the bishops wrote that all we equal in the sight of God, and if that is so, no one could reasonably conclude that such thinking was compatible with segregation. African Americans “wish en education that does not carry with it any stigma of inferiority. They wish economic advancement based on merit and skill. They wish their civil rights as American citizens. They wish acceptance based upon proved ability and achievement. No one who truly loves God’s children will deny them this opportunity.” In calling for change, the bishops stressed gradual advancement, arguing that deep-seated segregationist attitudes will not be changed overnight. While some change may come quickly, they wrote, other advancements may take time.

With this statement, American Church leaders had made their most forceful opinions on civil rights to that time known. At the very least, the national leadership had placed itself squarely on the side of equality; in some areas, local leaders would be slower to embrace change.

1. To what do the bishops ascribe the race problem in the United States?

2. Why do the bishops call for “prudence” in the solving of racial issues?

← Articles on Little Rock segregation; “An Elementary Catholic Catechism on the Morality of Segregation and Discrimination”
Next Page:

"The Catholic Church and the Negro in the Archdiocese of Chicago" →