American Catholic History Classroom > Exhibits > The Catholic Church, Bishops, and Race in the Mid-20th Century > Documents > Articles on Little Rock segregation; “An Elementary Catholic Catechism on the Morality of Segregation and Discrimination”

Articles on Little Rock segregation; “An Elementary Catholic Catechism on the Morality of Segregation and Discrimination” 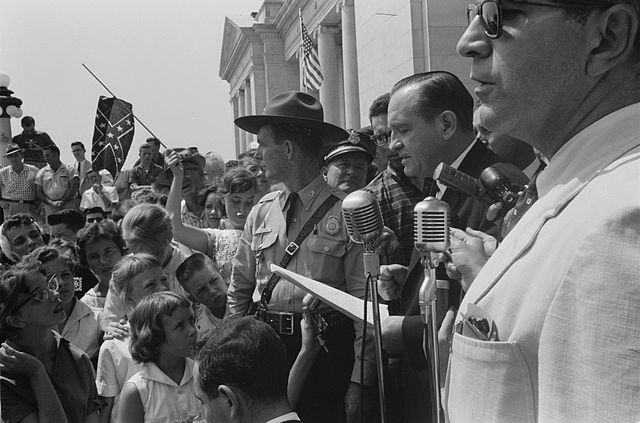 Courtesy of Library of Congress

The Civil Rights Era often led to moments of conflict between Catholic officials who supported the Church’s stance against segregation and state governments that upheld the practice. Arkansas became one of those battlegrounds in the 1950s, particularly after the well-known school integration crisis in Little Rock in 1957. The city school board, attempting to follow the mandates of Brown vs. Board of Education, set up a plan that would allow the gradual integration of Little Rock schools, starting with nine students at Little Rock Central High School in September 1957.

Governor Orval Faubus defied the school board and sent Arkansas National Guard troops to bar the students from attending. After intervention from President Dwight Eisenhower, the nine students were allowed to enroll by the end of September. The acts of Faubus did not go unnoticed in the Catholic Church, drawing the ire of the official newspaper of the Vatican, Osservatore Romano. In two newspaper articles printed in U.S. newspapers, the Vatican newspaper condemned Faubus, stating that “Whoever professes racist principles and whoever defends them and applies them under any pretexts should not be admitted to the exercise of political duties.” 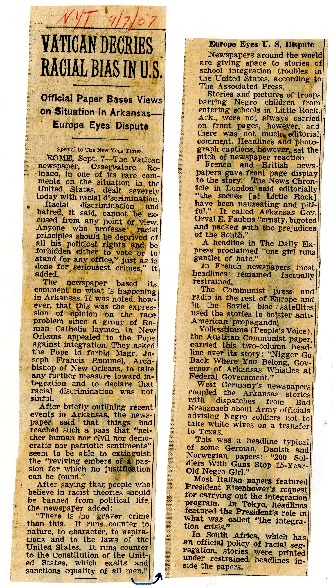 Faubus’ segregationist policies also did not escape condemnation within his own state from Catholic leaders. Bishop Albert L. Fletcher of the Diocese of Little Rock had denounced segregation and discrimination since the beginning of his tenure in 1946, and took steps toward informing his parishioners of the Church’s stance on such issues by writing “An Elementary Catholic Catechism on the Morality of Segregation and Racial Discrimination.” As the name suggests, the documents lays out in catechistic format the current state of racial affairs in Arkansas, denounces segregation as “immoral because it discriminates unjustly and uncharitably against human beings on the basis of race alone” and that the Church “condemns Racism as contrary to its teaching that all men are inherently and naturally equal, and have the same dignity as children of God; are derived from the same first human Parents, and are redeemed by the same Savior.” 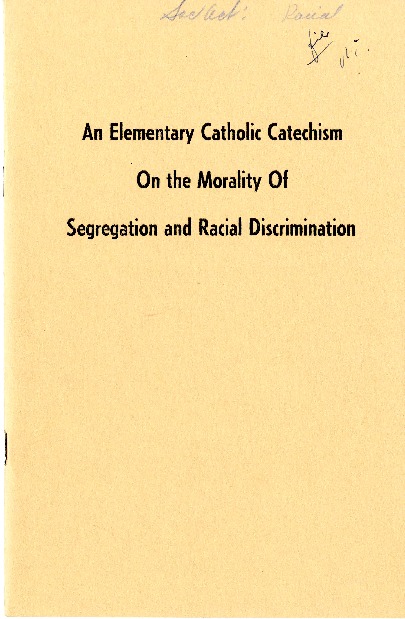 1. The New York Times article states that Osservatore Romano rarely commented on race in the United States. Why might have the paper decided to comment on the Little Rock situation?

2. Why is it significant that the Diocese of Little Rock elected to produce a catechism condemning segregation and racism?

← "Catholics and the NAACP"
Next Page:

"Racial Discrimination and the Christian Conscience" →