Critique on the Historical Treatment of the American Negro (ca. 1945) 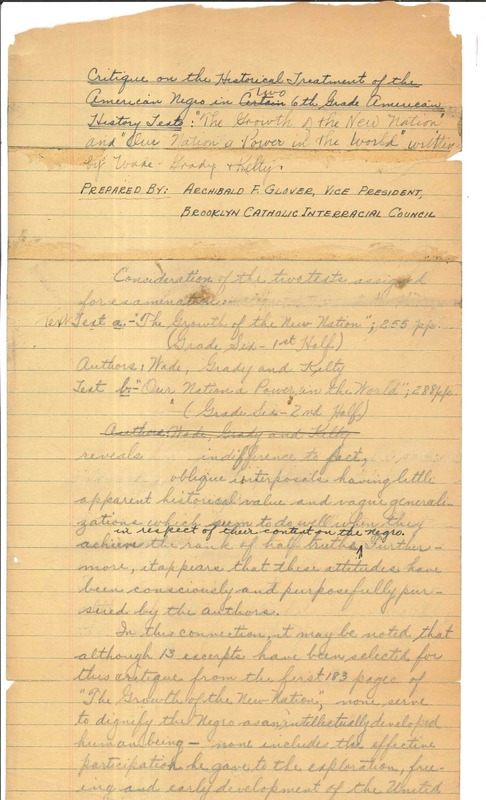 In this document, Archibald F. Glover, the Vice President of the Brooklyn Catholic Interracial Council, articulately refutes passages about Blacks from a pair of history textbooks intended for sixth-grade children. Despite the rather bland and business-like title — “Critique on the Historical Treatment of the American Negro in Two 6th Grade American History Texts” — Glover’s analysis is scathing. His introduction, transcribed below, sets the tone for the rest of the piece:

[First page]
Consideration of the two texts assigned for examination [...] reveals indifference to fact, oblique interposals having little apparent historical value and vague generalizations which seem to do well when they achieve the rank of half truths in respect of their content on the negro. Furthermore, it appears that these attitudes have been consciously and purposefully pursued by the authors.
In this connection it may be noted that although 13 excerpts have been selected for this critique from the first 183 pages of “The Growth of the New Nation,” none serve to dignify the negro as an intellectually developed human being — none includes the effective participation he gave to the exploration, freeing and early development of the United...

[Second page]
... States of America.
Of course, it is clearly understood that no author is obliged to include any topic which he does not choose to incorporate into his work. However, it is not unreasonable to require that he tell the unadulterated truth concerning those items which are to be included in a history textbook for schools.
In order to substantiate the foregoing assertions, specific excerpts from the texts, accompanied by short discussions of their merit, follow: [...].

Please read Excerpts 1 and 4 from Text a, “The Growth of the New Nation,” transcribed below. Follow this link to see a PDF of Glover’s complete critique of Text a.

Text a
1) Pg. 15, a. — “His slaves loved him. When he returned home after a long absence, they would sometimes unhitch the horses from his carriage and draw it up the hill to the great house themselves.”
Discussion — Granting the truth of this statement, what historical purpose can be served by its inclusion at this point? Was it included in order to fix the tho’t [thought] that black men in bondage could offer nothing but this brutish expression of affection? Or was it culled from what happened on occasions when the road was too muddy for a team of carriage horses to negotiate it? It most certainly does not enjoy the / same historical value or dignity as does Mr. Jefferson’s correspondence with Benjamin Banneker or his recommendation of the latter to serve on the commission that surveyed and laid out Washington, D. C.

4) Pg. 122, a. — “The slaves were usually glad of the change.”
Discussion: This statement is at once the most ridiculous and the most insidious in the book. Whatever research developed the fact that black men were happier looking forward to picking cotton in bondage in the southwest as against the southeast is open to question.
The sentence clearly reinforces the authors’ general implication that the negro, of all races, was amenable to the disgrace of slavery. The verified record of numerous slave revolts belies such assumption.
If the negro had not evidenced a strong, human desire for freedom it might be concluded with some reason that as a lesser being the change would have some special childish significance. However, the records show that like all other races which had been enslaved before him, he struck whenever he thought he had a chance for freedom or whenever despair drove him to suicidal effort.

1. Does seeing the critique in draft form (i.e., handwritten on lined paper) make the content of Glover’s argument more or less powerful in your opinion? Explain your reasoning.

2. Given that the critique was written sometime in the 1940s, do you think Glover’s arguments were ahead of his time? Why or why not?

3. Who do you think the intended audience of the critique was?

4. Do you think Glover was Black or white? How might knowing his race impact your reading of the document?

The Education of Our Young Religious Teachers (1949) →