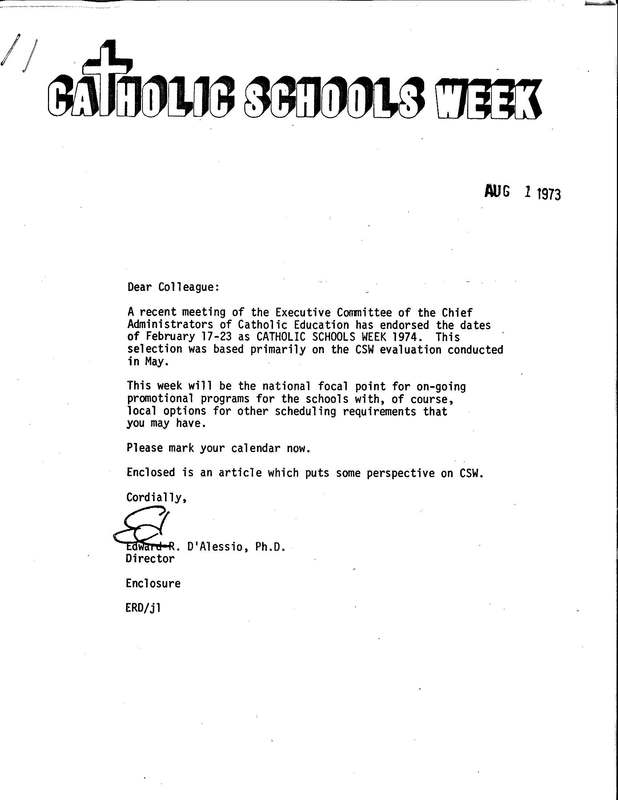 This article from June 1973 introduces the promotional campaign known as Catholic Schools Week. Click here for the full text. Please read the excerpts below.

Catholic schools are now beginning to tell their story to the community — that they are viable educational institutions that seek to provide a unique, value-oriented quality education. The week of March 25-31 marked Catholic Schools Week 1973 — a nationwide effort launched by the Natioanl Catholic Educational Association and the United States Catholic Conference and coordinated by the Division of Elementary and Secondary Education at USCC.

The essential goal of Catholic Schools Week was to encourage schools, with diocesan assistance, to tell their story to the community. CSW improved the perception and valuation of Catholic schools by the Catholic community and by the general public; generated a preference for Catholic elementary and secondary schools among Catholic parents; supported localy originated promotional campaigns of individual schools, and increased Catholic school enrollment in many areas.

Catholic Schools Week is a self-help project. It can be a stimulus not only to increased enrollment but to grass roots involvement and renewed interest in the schools by its patrons. It’s contagious: Remember, the best of times for America’s Catholic schools is yet to come.

1. Consider the title of the article by Dr. D’Alessio. In what sense is Catholic Schools Week a form of “self-help”?

2. In the third paragraph of the article, Dr. D’Alessio refers to the need to promote Catholic schools “in today’s buyer’s market.” How do the two themes — “Make a Value Judgment” and “Choose Catholic Schools” — fit into the notion of a “buyer’s market”?

3. In what ways was the 1893 Catholic Educational Exhibit similar to Catholic Schools Week?

4. Dr. D’Alessio lists many forms of promotional activities. Which of these would still be effective today? What other means of marketing might you consider in our time?