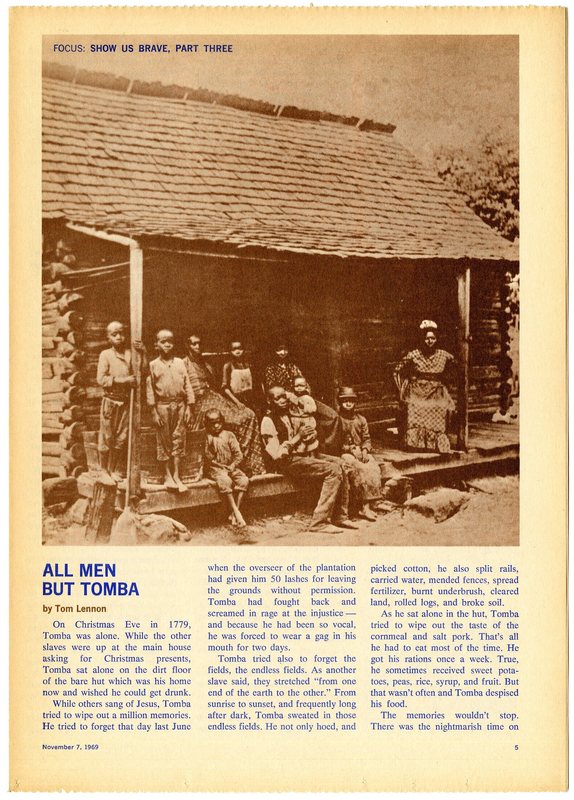 The second installment of Show Us Brave, "All Men But Tomba."

This story is the second installment of the Young Catholic Messenger’s Show Us Brave series, the title of which is borrowed from the poem “If We Must Die” by Claude McKay (1889–1948). Tomba is a character introduced in Episode One, “Part II: The Longest Night.” He was kidnapped from Africa in 1776 at the age of 17, sold into slavery, and shipped across the Atlantic. In Episode Two, “All Men Tomba,” the reader finds Tomba sitting “alone on the dirt floor of the bare hut which was his home now” on Christmas Eve in 1779. Please read the excerpts below.

1. What recurring themes from the story stand out to you?

2. The Teacher’s Edition for this issue of Young Catholic Messenger asks that students “contrast the ease with which they acquire an education with the impossibility of most slaves even learning to read. Be sure they understand why the master wanted his slaves to be ignorant. This can be compared to the modern era when the so-called ‘separate but equal’ schools deliberately provided poorer facilities for the Negro students.” Do you think such comparisons are dated, or could they still be relevant today?

3. Stylistically, the story is very blunt. How effective do you find this approach?

4. Do any of the excerpts surprise you? If so, why?