Before the Sister Formation Conference

Sister-teachers were at once the workhorses and scapegoats of the Catholic school system. In the nineteenth and early twentieth centuries, they were absolutely indispensable to day-to-day operations, but frankly they were little more than warm bodies stationed in overcrowded classrooms; that is to say, they were notoriously unqualified to teach. Crucially, sister-teachers were also notoriously underpaid—in some cases even unpaid. In effect, the underpaid, under-prepared sister-teachers made it possible for the Catholic Church to operate its schools on a shoestring budget, but they also contributed to the widespread impression that Catholic schools had low academic standards.

As Professor Margaret Susan Thompson of Syracuse University has observed, women religious in the early twentieth century tended to be treated as “interchangeable and quantifiable cogs in an institutional machine that emphasized productivity and uniformity.” [33] Although some communities permitted young women entering religious life to choose their vocation, “the majority simply assigned women to do what was needed most—regardless of inclination or training, and sometimes regardless of talent.” [34] Teaching was a big one. 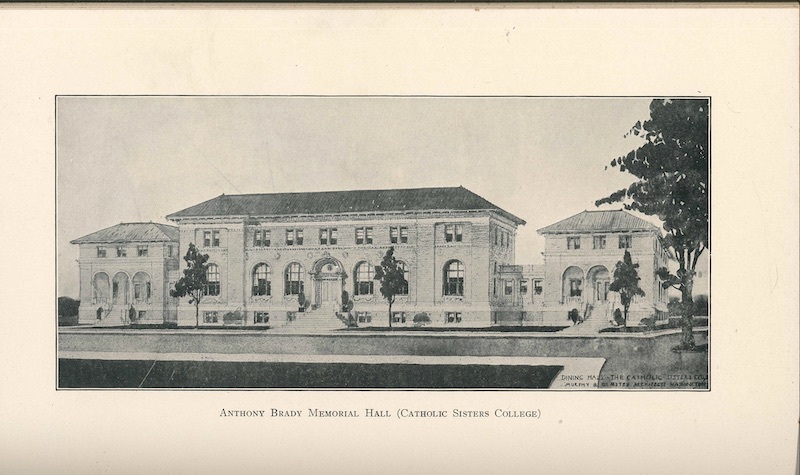 Sisters College, established in 1911 as a result of the efforts of the Rev. Thomas E. Shields.

The lack of emphasis on the education of women religious was symptomatic of the barriers that women as a whole faced to higher education. At The Catholic University of America, for example, there had been a teacher training program since as early as 1898, but the University only admitted men—“thereby excluding the largest and most influential body of educators from pedagogical instruction.” [35] The Reverend Thomas E. Shields attempted to rectify the situation through the establishment of Sisters College in 1911 on about sixty acres of land adjacent to the campus of Catholic University. Incidentally, Sister Thomas Aquinas O’Neill—who studied at Sisters College and earned her doctorate in philosophy in 1915—once told a fellow Domincan sister how resistant the professors in Catholic University’s philosophy department were back then to teaching women; one professor supposedly made Sister O’Neill sit in a chair in the hall just outside the door—unable to stomach the thought of having her in his classroom. [36]

Throughout the nineteenth and early twentieth centuries, sister-teachers typically received on-the-job training through “a kind of medieval apprenticeship program, with older sisters passing on what they had learned in the classroom to young novices.” [37] After World War I, state legislatures began requiring teacher certification—a measure designed to standardize the quality of education that American children received. Although, as Walch points out, “in most states these requirements affected only public schools,” Catholic schools nevertheless felt pressured to keep up: “raising the standards of professional education of Catholic teachers was [according to the Education Department of the National Catholic Welfare Conference] the most important defense that Catholic schools had against further encroachments of the state into private education.” [38]

Still, decades after the advent of teacher certification, sister-teachers were commonly sent into the classroom with only a few semesters of college and were expected to complete their degrees in what little spare time they had outside of their teaching duties—i.e., by taking classes in the evenings or over the summer. John J. Fialka describes exactly such a situation in Chapter 14 of his 2003 book Sisters: Catholic Nuns and the Making of America: “by 1949 Sister Sharon was on her way to getting a degree in education. She could hardly wait. The parochial school couldn’t wait. When she was still a “junior” sister, having taken only temporary vows as a religious, the order pulled her out of college. There was a vacancy in second grade that had to be filled. It later took her ten years of summer school to finish college.” [39] 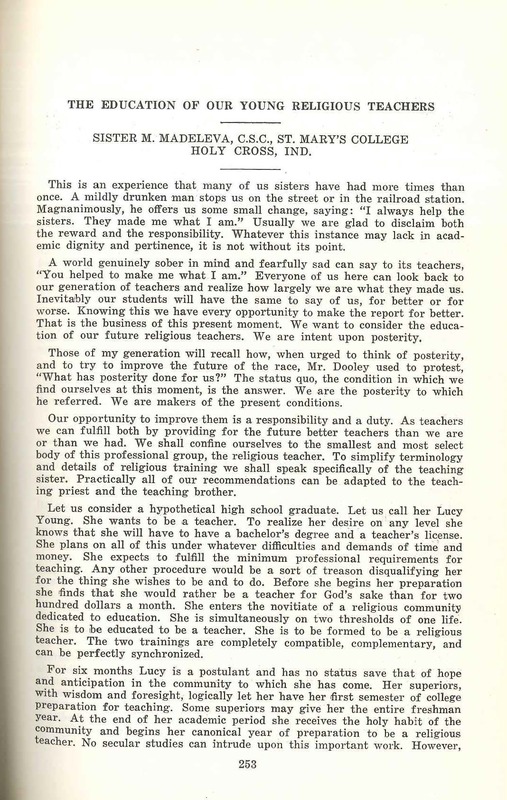 Presented at the 1949 NCEA Convention, this article by Sister M. Madeleva, C.S.C., is based on a hypothetical high school graduate poised to enter religious life: Lucy Young. In it, Sister Madeleva argues for better professional training of sister-teachers.

On September 15, 1951, Pope Pius XII addressed the First International Congress of Teaching Sisters. Although he allowed that “Many of your schools are being described and praised to us as being very good,” he implied that this was not the case for all of the schools. [43] His hope was that, through better training and education, sister-teachers would become “masters of the subjects they expound.” [44]

After the Sister Formation Conference →