This letter from a concerned mother personalizes the effects of institutionalized anti-Catholicism on Catholic families. Please find a transcription of the letter and additional context below. 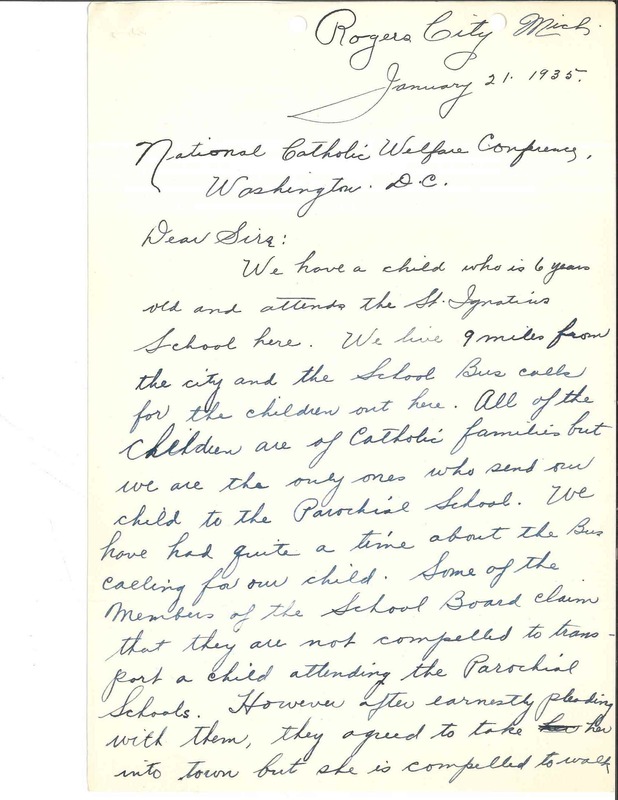 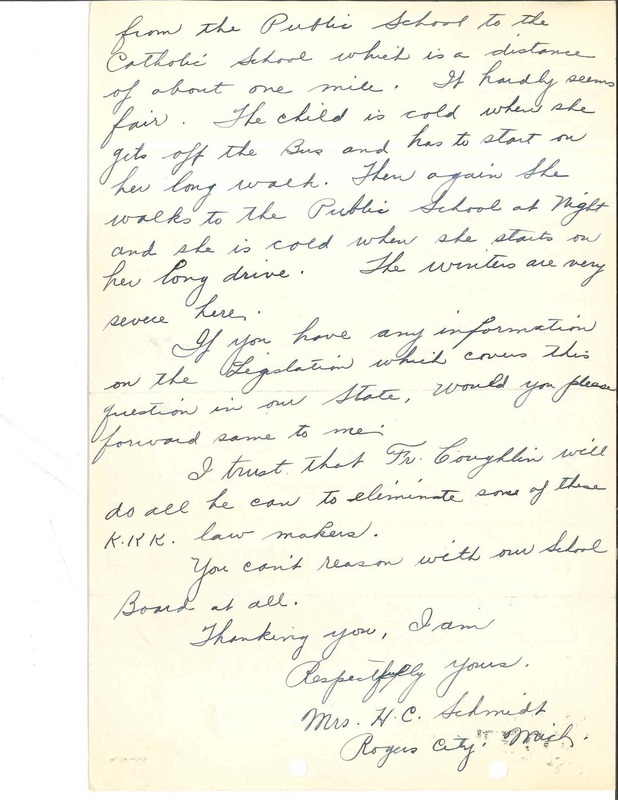 Pages one and two of the handwritten letter dated January 21, 1935 from Mrs. H. C. Schmidt of Rogers City, Michigan to the National Catholic Welfare Conference in Washington, D.C., regarding the school bus situation for her six-year-old daughter.

We have a child who is 6 years old and attends the St. Ignatius School here. We live 9 miles from the city and the School Bus calls for the children out here. All of the children are of Catholic families but we are the only ones who send our child to the Parochial School. We have had quite a time about the Bus calling for our child. Some of the members of the School Board claim that they are not compelled to transport a child attending the Parochial Schools. However after earnestly pleading with them, they agreed to take her into town but she is compelled to walk from the Public School to the Catholic School which is a distance of about one mile. It hardly seems fair. The child is cold when she gets off the Bus and has to start on her long walk. Then again she walks to the Public School at night and she is cold when she starts on her long drive. The winters are very severe here.

If you have any information on the Legislation which covers this question in our State, would you please forward same to me.

I trust that Fr. Coughlin will do all he can to eliminate some of the K.K.K. lawmakers.

You can't reason with our School Board at all.

Thanking you, I am,
Respectfully yours.
Mrs. H. C. Schmidt
Rogers City, Mich.

It is notable that the Schmidt family resides in Michigan, where in 1920 a referendum on compulsory public education received a surprising amount of support—foreshadowing the Ku Klux Klan’s ability to get The Compulsory Education Law passed in Oregon in 1922. (See this sister-site for more information about the Oregon School Case!) This is what Mrs. Schmidt is alluding to when she invokes “K.K.K. lawmakers” and the obstacles they pose to her daughter’s ability to get a Catholic education. Although the Klan is commonly associated with the American South, it was active throughout the North and Northwest in the 1920s and 1930s. During the interwar years its white supremacist message hinged on fear and hatred of immigrants; the Klan lauded public schools as tools for Americanizing foreign-born immigrants and vilified Catholic schools as dens of treason. Interestingly Mrs. Schmidt also names the controversial radio priest Father Charles Coughlin, who on the one hand was a vocal critic of the Klan but who, on the other, harbored facist and antisemitic views.

1. How does the letter fit into the debate over the separation of Church and State?

2. Is the situation that Mrs. Schmidt describes a violation of religious liberty? Why or why not?