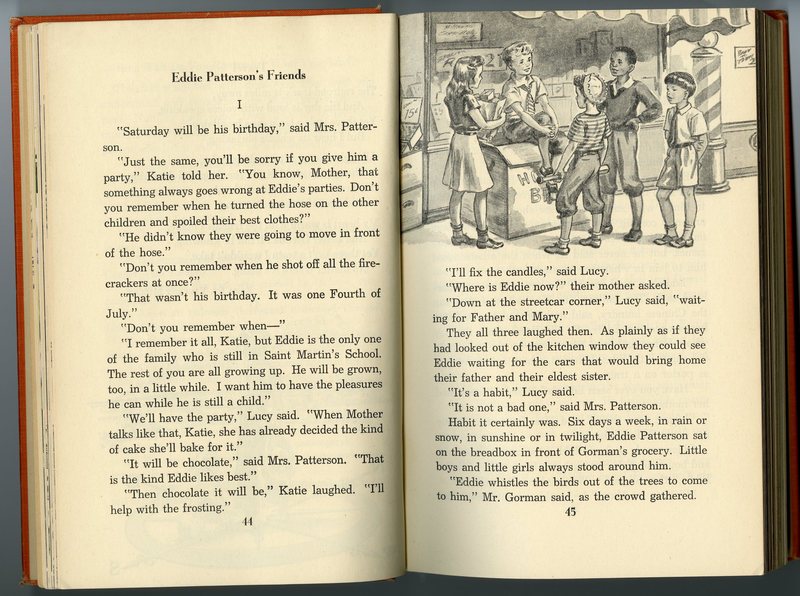 The first spread of the story “Eddie Patterson’s Friends,” from the 1943 textbook These Are Our People. Perched on a breadbox outside the grocery store, Eddie is surrounded by a diverse group of friends—which the story applauds.

This story appeared in the 1943 textbook These are Our People, part of the Faith and Freedom series produced by the Commission on American Citizenship (CAC). Please read the following excerpts from the story.

Six days a week, in rain or snow, in sunshine or in twilight, Eddie Patterson sat on the breadbox in front of Gorman’s grocery. Little boys and little girls always stood around him.
“Eddie whistles the birds out of the trees to come to him,” Mr. Gorman said, as the crowd gathered.

“Eddie’s a good scout,” the boys of the neighborhood said. The smiling Yim Kee, whose father ran the Chinese laundry, said nothing; but he stood for hours watching Eddie. So did Frank Bell, the boy whose father had been taken away by the police. So did eager little Silas Jefferson, whose father worked as a porter on a train.

[The children eventually follow Eddie home, where his family is staging a surprise birthday party for him.]

[Eddie] was staring, a little wildly, at the flowers and the candles, at the scraps of cake, at the melting ice cream, at the few candies left on the table. Around him shone happy faces, white and yellow and black.

2. What is the moral of the story?

3. How does the story show that Catholicism is compatible with American citizenship?

Critique on the Historical Treatment of the American Negro (ca. 1945) →