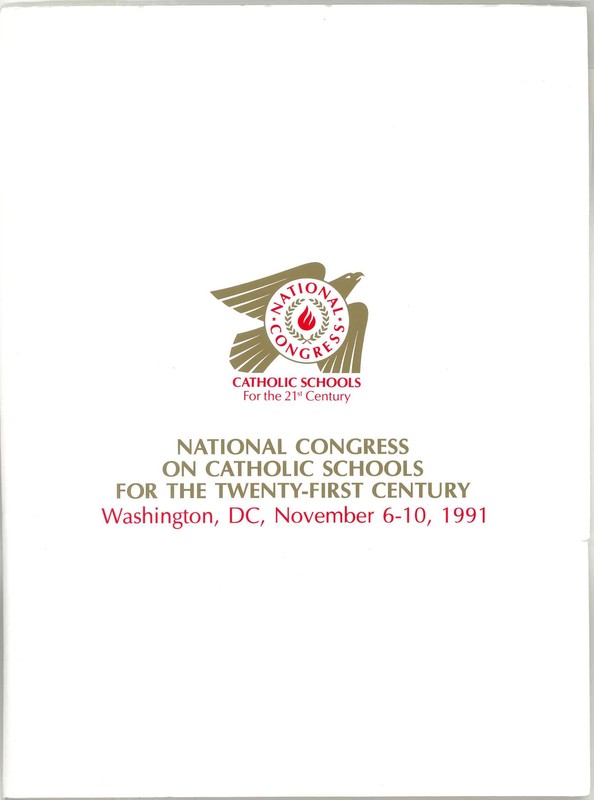 Pocket folder with the logo of the National Congress on Catholic Schools for the 21st Century emblazoned on the cover.

It was in this considerably more temperate climate that the National Catholic Educational Association (NCEA) called the 1991 National Congress on Catholic Schools for the 21st Century—“the first event of its kind.” [15] Then-president of the NCEA Catherine T. McNamee explained the timing: “Education is at the forefront of the national agenda today, with educational choice heading the list for school reform.” [16] At the Congress, the 250 delegates (who included Church leaders, community leaders, educators, legislators, and researchers) explored five themes in Catholic education, the first of which was “The Catholic Identity of Catholic Schools.”

Sister Barbara Davis, S.C., then-principal of St. Mary School in Shelby, Ohio, was one of ten delegates working on the Catholic identity theme. In a short article that appeared in April 1992, Davis wrote: “I chose to be part of the Catholic identity topic group because of my conviction that we need to articulate well the very reason for our existence.” [17] In the same article, Davis goes on to describe the difficulty the group had expressing their ideas: “Each person seemed to know internally what it means to be a Catholic school, but putting that experience into words was a challenge. Furthermore, the statements on Catholic identity are the foundation for all other areas. If we do not have a unique mission, none of the other areas has purpose.” Thus, Davis’s reflection on the Congress goes to show that the conflict in 1991 was primarily internal; defining the Catholic school identity seems to have been a matter of gaining consensus among fellow Catholics. 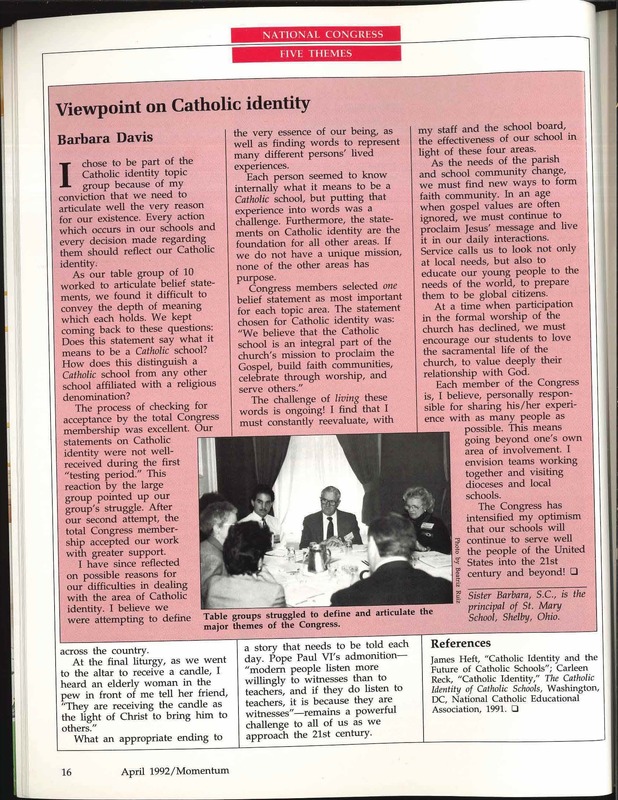 A short article from the April 1992 issue of Momentum magazine written by Sister Barbara Davis, S.C., one of ten delegates working on the Catholic identity theme at the 1991 National Congress on Catholic Schools.

Father James L. Heft, S.M., was another member of the Catholic Identity group. At the time of the 1991 Congress, Heft was serving as the Provost of the University of Dayton—a private Catholic research university in Dayton, Ohio—where he had previously chaired the Theology Department; he would go on to serve as Chancellor of the University before leaving in 2006 to establish the Institute for Advanced Catholic Studies (IACS) at the University of Southern California. Heft wrote a theme paper for the Congress entitled “Catholic Identity and the Future of Catholic Schools” in which he highlighted how much had changed since the 1890s: “Instead of reacting to the threats of Protestantism’s domination of the public school system, a situation which clearly no longer remains, Catholics today will be reacting to those negative elements of modern culture that threaten Catholic, and for that matter, Protestant, identity at the foundations: materialism, consumerism, individualism, and the fragmentation of knowledge.” [18] Granted, Heft’s anti-modern argument represents a rather conservative viewpoint. For our purposes, however, what is interesting about Heft’s argument is the way it brings Catholic and Protestant identity into alignment by contrasting it with secular tendencies like materialism.

In that sense, Heft’s comments reflect the same shift that Catholic University archivist John Shepherd explained in his research guide on Anti-Catholicism: “After 1980, historic tensions between evangelical Protestants and Catholics dissipated as the two groups often saw themselves allied in opposition to divisive social issues like abortion and gay marriage.” In an ironic turnaround, then, by the late twentieth century, Catholics and Protestants had after years of enmity become allied broadly as Christians, more or less on the basis of the enemy of my enemy is my friend.

Catholic Schools and the Supreme Court →