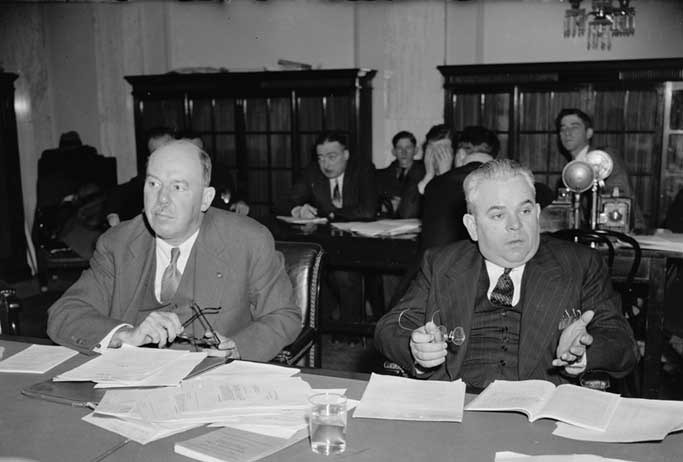 Senate Immigration Subcommittee Hearings, 1955
Courtesy of the Library of Congress

The decade following the passage of the McCarran-Walter Act witnessed the continuing efforts of the NCWC and others in the quest for new legislation that would eliminate the national origins quota system. By 1965, when Representative Emmanuel Celler (D-New York) and Senator Philip Hart (D-Michigan) co-sponsored a bill which would abolish the quota system entirely, support for immigration restriction based on national origin had eroded to such a degree that the bill was easily passed. The dramatic shift in American immigration policy reflected wider cultural changes that had transformed American views on race.

The "scientific" views on race which had informed the original 1924 quota system had been thoroughly discredited by the early 1960s. In addition, the Civil Rights movement transformed American perceptions of race relations by drawing attention to the injustice and bigotry of racial discrimination. As a result, the racist arguments used to support immigration restrictions lost legitimacy. The U.S. Supreme Court's decisions on racial discrimination, beginning with the famous Brown v. Board of Education ruling in 1954, further eroded the logic behind the national origins quotas, and challenged the American people and legislators to reevaluate the ways in which questions of race influenced political decision-making. These cultural changes made it increasingly difficult to maintain immigration policies based on racism. 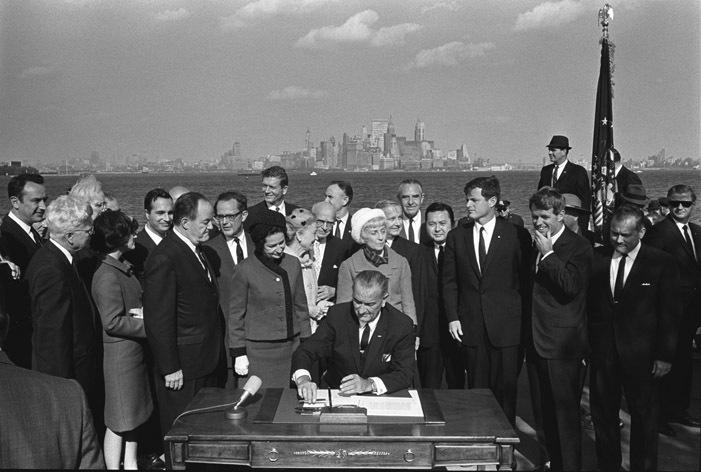 The bill proposed by Celler and Hart advocated replacing the quota system with an annual cap on immigration, regardless of country of origin. During the debate on the proposed legislation, American Catholic leaders voiced strong support for the bill. Since the passage of the 1924 Johnson-Reed Act, the Catholic Church had regularly voiced opposition to the discriminatory features of American immigration law, pointing out that it rested on anti-Catholic bigotry as well as racial prejudice. On June 1, 1965, the director of the Department of Migration, John McCarthy, wrote a letter to the NCWC's General Secretary, Rev. Paul Tanner, stating that the immigration legislation proposed by Celler and Hart was "excellent" and would "eliminate the iniquities and prejudices that have existed in our immigration laws for the past forty years."1

Throughout the summer of 1965, the NCWC sought to rally support for the immigration legislation through outreach to the press, grassroots campaigns, and the coordination of activities with the Catholic hierarchy across the United States. Their advocacy efforts eventually proved successful. Sitting in the shadow of the Statue of Liberty, President Johnson signed the bill into law on October 3, 1965. Only thirteen years separated the passage of the McCarran-Walter Act, which reaffirmed the quota system, and the 1965 immigration act, which eliminated it. Senator Edward Kennedy, one of the Act's leading advocates, noted that its passage was a victory over "radicalism" and "reaction", a defeat for the bigotry and prejudice that was embodied in the quota system. He remarked that the "national-origins quota system was conceived in a radical period of our history - a period when bigotry and prejudice stalked our streets, when fear and suspicion motivated our actions toward the world around us."2

The new legislation signified a major shift in U.S. immigration policy. While it ended the practice of racial discrimination in issuing visas, it still provided ways to regulate the number of immigrants entering the United States. In place of national origins quotas, the Celler-Hart Act created a cap of 290,000 visas per year; a total of 170,000 visas were to be provided for countries in the Eastern Hemisphere, with no more than 20,000 visas allotted for each country. A 120,000 visa cap was developed for countries in the Western Hemisphere, with no per-country limit.

One important exception existed in the annual limits: spouses, unmarried minor children, and parents of U.S. citizens were exempt from the numerical limits. This emphasis on family reunification was an important aspect of the Celler-Hart Act, which substantially amended the preference system of the 1952 legislation. The 1965 Act created a seven-tiered preference system, with family reunification given top priority: four of the seven tiers were reserved for family members U.S. permanent residents. Two secondary tiers addressed employment-based immigration, giving preference to immigrants with professional skills or status. The seventh tier focused on the admission of refugees. 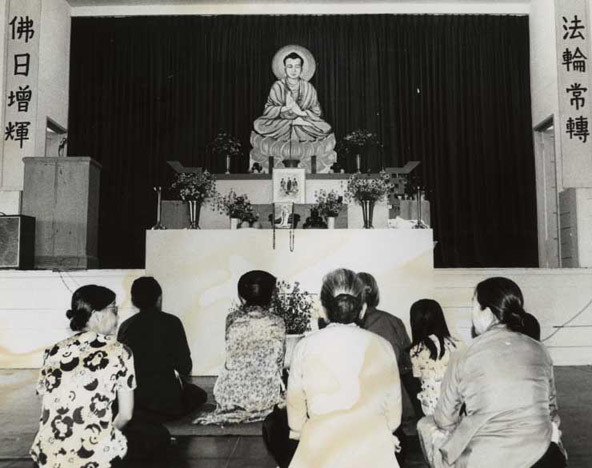 Vietnamese immigrants in California, ca. 1975
Courtesy of the University of California, Irvine

The 1965 Act led to substantially more legal immigration and altered the ethnic makeup of the immigrant community. By 1975, legal immigration was up at least sixty percent, and the numerical caps were raised. Most of the new immigration came from developing nations: immigration from Europe decreased significantly, while immigration from Asia, Central America, and the Caribbean dramatically increased. Total immigration from the Asia-Pacific Triangle, for example, jumped from 15,186 in 1965 to 80,971 in 1969.3 The increase was in large part the result of "chain migration," as family members abroad followed other relatives into the United States. The flood of "new" immigrants, as well as concerns over illegal immigration, led to renewed debates on immigration policy, debates which have become especially prominent in the early twenty-first century.

1Memo, John McCarthy, Director of the Department of Immigration, to Monsignor Tanner, Aug. 10, 1965.

Unfortunately, you sacrficed that beautiful experience known as "White America".