American Catholic History Classroom > Exhibits > The U.S. Conference of Catholic Bishops and Immigration > Documents > "An Act to Limit the Immigration of Aliens into the United States," H.R. 4075, Approved May 19, 1921 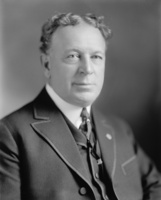 Rep. Albert Johnson, n.d.
Courtesy of the Library of Congress

The "Emergency Immigration Act of 1921," also known as the "Johnson Quota Act," established the first quota system based on nationality, by which immigration from a specific nation was limited to a certain percentage based on the number of previous immigrants from that nation. The Act was sponsored by Rep. Albert Johnson (R-Washington), the chairman of the House Committee on Immigration and Naturalization. Johnson's bill proposed to use the 1910 census to establish immigration quotas, which would drastically reduce the flow of immigrants from southern and eastern Europe by reserving over half of the quotas for north-western Europeans. Quota restrictions had been proposed prior to 1921, but, like the literacy test for immigrants, had failed to pass. Anti-German sentiment following World War I, however, helped increase support for the bill; labor unions also favored greater restriction from the belief that job competition from immigrants was responsible for falling wages.

NCWC Protest to Congress Against the 1924 Immigration Bill, January, 1924 →