American Catholic History Classroom > Exhibits > The U.S. Conference of Catholic Bishops and Immigration > Background > The Founding of the Bureau of Immigration

The Founding of the Bureau of Immigration 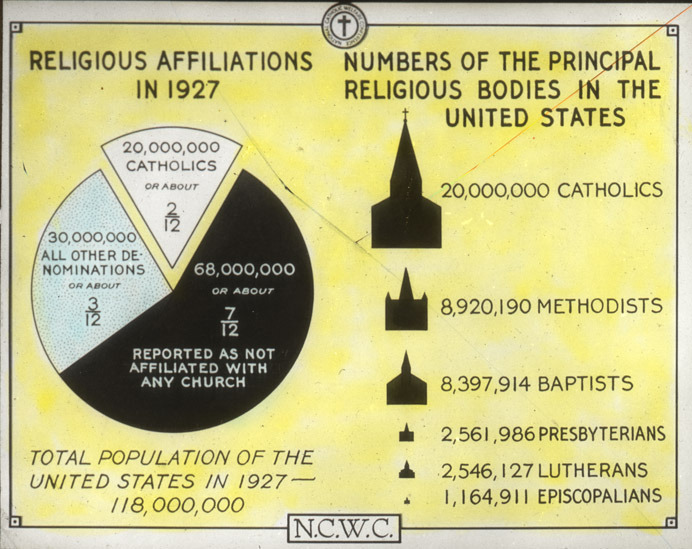 Catholics have been present in America since the colonial era, though they remained a minority in a Protestant country until the late nineteenth and early twentieth centuries, when a huge influx of immigrants began altering the religious map of the country. By 1910, there were over 16,363,000 Catholics in the U.S. (out of a total population of around 92 million); by 1920, this number had grown to 19,828,000 (total population, just over 106 million). This means that over 3.5 million Catholics immigrated to the United States between 1900 and 1920.1

Today, Roman Catholics comprise the largest religious denomination in the U.S., with over 67 million registered members spread across 195 dioceses.

This period of mass migration to the U.S. (roughly 1880-1920) was accompanied by dramatic economic, social, and cultural changes, particularly in the cities. The growth of manufacturing, the expanding industrial sector, and the explosion of railroad networks meant that labor was in high demand. People flocked to the cities in search of work and immigrants poured into the country hoping to find employment in America's factories. As a result, the nation witnessed unprecedented population redistribution: the urban population jumped from 6.2 million in 1860 to 44.6 million in 1910 - in other words, city-dwellers went from 19.6% of the national population to 45.7% in just fifty years! The new urban centers created new markets for goods produced in the factories, which in turn encouraged the further growth of American manufacturing. 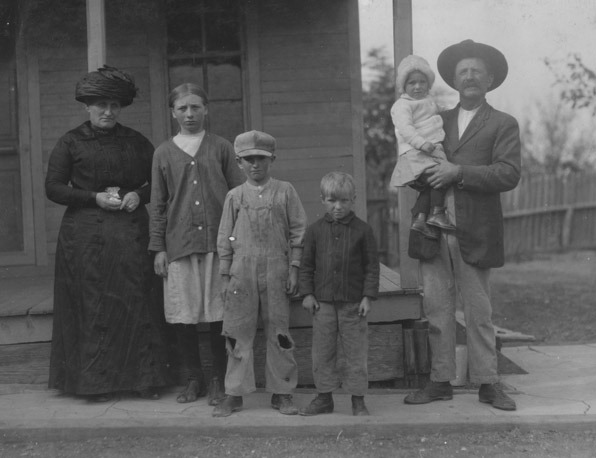 Family of Czech immigrants, 1913
Courtesy of the Library of Congress

Social and cultural changes paralleled these economic changes, as the vast wave of immigrants altered the ethnic profile of the country. Up until 1896, most immigrants had come primarily from Northern and Western Europe, especially from Germany, Ireland, and Scandinavia. By 1907, however, the vast majority were arriving in the U.S. from Southern and Eastern Europe, particularly Italy, Poland, and the Slavic lands. Most of these newer immigrants were Catholic, and they settled primarily in the cities of the East and the Midwest. In New York City, for example, four of five residents were either immigrants or children of immigrants by 1910.2

These Catholic immigrants created communities that differed considerably from the established Anglo-Protestant pattern. Few spoke English, and many were impoverished working-class laborers. Immigrants tended to congregate in urban areas with others from their country of origin, creating ethnic neighborhoods in the cities. These neighborhoods were shunned by the Protestant majority, who viewed them as breeding grounds for illiteracy, disease, immorality, and un-Americanism. The Catholicism practiced in these ethnic communities also drew suspicion, as it looked very different from the practices established by earlier Catholic settlers in the U.S. The immigrant Catholics focused on creating vibrant parish networks built around ethnic group identification. Priests and religious orders were brought from the old country to minister to the new parishes. As these ethnic communities grew, churches, schools, charitable organizations, newspapers, hospitals, and other institutions arose to serve them. For example, in 1880, there were 2,246 parochial elementary schools with 405,234 students in the U.S.; by 1910 there were 4,845 parochial elementary schools and 1,237,251 students.3 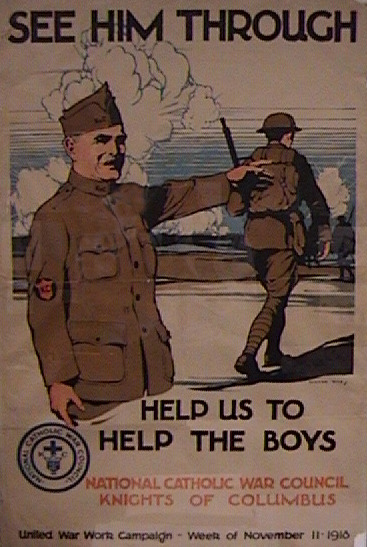 The burdens of caring for new Catholic immigrants, and the problems of unconnected ethnic parishes, however, became evident during the First World War. When the United States entered the war in 1917, the country's archbishops realized that they possessed no organizational framework through which they could organize the activities of American Catholics. Many Catholics were new arrivals to the U.S., and needed assistance in establishing jobs and homes before they could contribute to the war effort. In addition, the ethnic parishes were unused to cooperative action. A group of prominent Catholic clergy, therefore, met in August 1917 at The Catholic University of America in Washington, D.C., to establish a new National Catholic War Council to streamline and organize the activities of American Catholics. The delegates selected the Paulist editor of the Catholic World, Father John J. Burke, to head the organization. 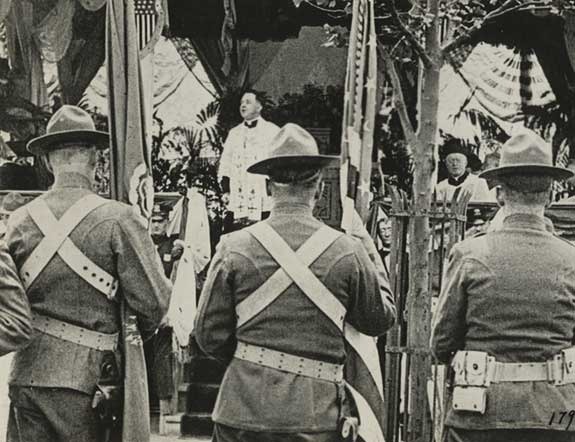 The American hierarchy soon realized that this wartime organization might serve the nation's Catholics in peacetime as well. In 1919, at the war's end, the War Council was transformed into the National Catholic Welfare Council ("Council" was changed to "Conference" in 1922), which involved itself in federal, state, and local levels in Catholic activities concerning legislation, education, publicity, and social action. The success of the NCWC in providing leadership for the growth and development of the American Catholic Church led hierarchies in many other countries to replicate the NCWC's organization and methods. The NCWC continued to serve the American church until 1966, when it was reorganized as the National Conference of Catholic Bishops (NCCB) and its working secretariat, the United States Catholic Conference (USCC). A further reorganization in 2001 resulted in another name change, which serves as the current title of the organization: the United States Conference of Catholic Bishops (USCCB). 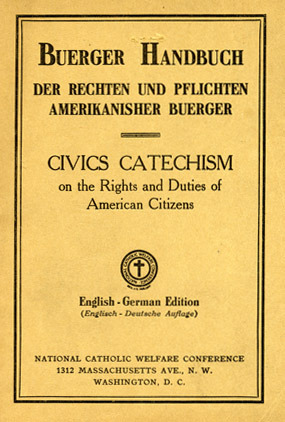 During its early years, the NCWC did not make any coordinated, systematic effort to address the needs of Catholic immigrants, preoccupied as it was with the war effort. In 1919, however, the NCWC established a Social Action Department, which sought to promote citizenship, improve industrial relations, and encourage charitable organizations. The complexity of post-war society complicated the mission of the NCWC's staff. The upheavals of the war had generated social and economic unrest. Some Americans, including many immigrants, believed that aggressive actions like labor strikes and bombings, or political philosophies like socialism and communism, were the best solutions to the post-war problems. Native-born Americans feared that Russia's Bolshevik Revolution in 1917 might spread to the United States; a "Red Scare" - a general fear that communist forces would violently overthrow capitalist society - gripped the nation between 1917 and 1920. Much of the anti-communist and anti-radical hysteria was directed at foreigners, who were suspected of importing dangerous communist ideology into America. Influenced by such circumstances, the Social Action Department set as one of its chief tasks the "Americanization" of foreign-born Catholics, educating new arrivals about American government, training them to adapt to American culture, and teaching them to embrace many aspects of Anglo-Saxon society. Parochial schools and adult citizenship classes used material and publications provided by the Social Action Department, such as the Civics Catechism, in their efforts to "Americanize" immigrants.4 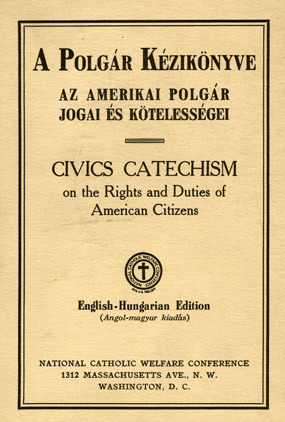 While both the publications of the Social Action Department and the work of its staff assisted immigrants in becoming acquainted with American society, neither element focused on aiding brand-new arrivals to the U.S. in establishing homes and jobs. Early in 1920, a letter from a Seattle lawyer and former congressman, Dudley Wooten, alerted Father John Burke, the head of the NCWC, to the possibility that Catholic immigrants at Ellis Island were being served, assisted, and influenced by Protestant organizations. In response to the concerns raised by Wooten, Burke held a staff meeting in 1920 to establish a Bureau of Immigration at the NCWC. Bruce Mohler, who had served as the Red Cross commissioner in Poland during World War I, was selected to head the new Bureau. The documents included in this page trace the foundation of the Bureau of Immigration and the goals and strategies employed to assist new Catholic immigrants.