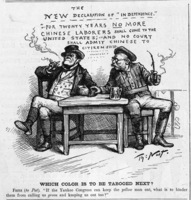 Political Cartoon Satirizing the Chinese Exclusion Act, 1882
Courtesy of the Library of Congress

The 1882 Chinese Exclusion Act had set a permanent ban on Chinese immigration which was extended in the 1924 Immigration Act to prohibit immigration from most of Asia. In addition to restricting immigration, the Act forbade Chinese and other Asian immigrants from becoming naturalized citizens, forcing them to remain permanent aliens in their new land. In 1943, Congressman Warren Magnuson (D-Washington), proposed a bill to repeal the Chinese Exclusion Act, allowing Chinese resident aliens to apply for citizenship and opening the doors to Chinese and Asian immigration on the basis of the national-origins quota system already in place. This memo from two leaders of the NCWC, Bruce Mohler and Michael Ready, discusses the provisions of the proposed legislation, which was finally signed into law in December of 1943. 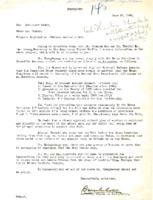