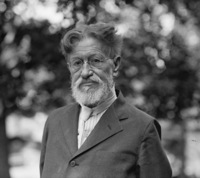 Louis F. Post, ca. 1928
Courtesy of the Library of Congress

John Burke, the General Secretary of the National Catholic Welfare Council, wrote this letter to the first U.S. Secretary of Labor, William B. Wilson, to protest the high proportion of Protestant organizations that were allowed to maintain an official presence on Ellis Island. The Assistant Secretary of Labor, Louis Post, wrote the official reply to Burke's letter, denying that the Department of Labor had at any time given the care of immigrants exclusively to the YMCA or any other Protestant organization. Post's career at the Department of Labor had been characterized by a marked degree of support for immigrant freedoms; in 1918 he had opposed the Anarchist Exclusion Act, and in 1920 he was actually the subject of impeachment proceedings after clashing with J. Edgar Hoover and A. Mitchell Palmer over the question of immigrants' rights. 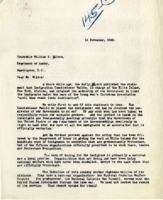 Letter from Burke to Wilson and reply from Post