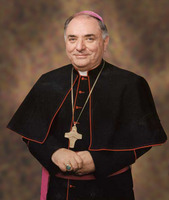 Most Rev. Gerald R. Barnes
Courtesy of the USCCB

Gerald R. Barnes, Bishop of San Bernardino, California, was the chairman of the USCCB's Committee on Migration during the congressional debates on the "Comprehensive Immigration Reform Act of 2007." Although the bill enjoyed the bi-partisan sponsorship of Senators Ted Kennedy and John McCain, as well as the support of President George W. Bush, the Act was defeated due to heavy criticism from both sides of the political divide. In particular, opponents of the bill criticized it for providing a possible path to citizenship for illegal immigrants. In this statement from early 2007, Bishop Barnes calls on Congress to work for the passage of comprehensive immigration legislation, insisting that the problem of illegal immigration is a humanitarian issue that requires a just and compassionate response. 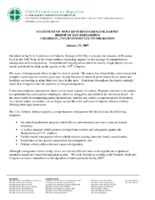