Bishop Edward J. O'Dea, 1921
Courtesy of Archives of the Catholic Archdiocese of Seattle

The news about the NCWC's new Bureau of Immigration spread quickly in the Church during 1921. After establishing offices at the various principal eastern ports, the leaders of the NCWC turned their attention to the problem of immigrants entering the country on the West Coast. In this letter, the first American-born bishop of Seattle, Edward O'Dea (1856-1932), writes to request the NCWC's help in caring for the wave of Filipino immigrants there. 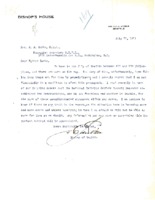 Letter from O'Dea to Burke and reply