After the leaders of the NCWC had set up their internal Bureau of Immigration, they needed to secure its official recognition by the federal agencies responsible for regulating immigration. John Burke thus wrote this letter to William Walter Husband, an expert in immigration issues whom President Warren G. Harding had recently appointed Commissioner-General of Immigraion at the Departmener of Labor. Husband understood the value of the NCWC's potential contributions to immigration work, and immediately extended formal recognition to the NCWC as a national agency. This letter is particularly interesting because it describes the organization of the NCWC and some of its specific undertakings in regards to new immigrants. 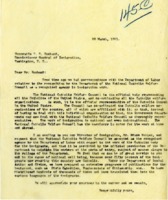 Letter from Burke to Husband