In 1920, an article in a local paper caught the eye of Dudley Wooten (1860-1929), a lawyer in Seattle who had formerly served as a Congressman from Texas. The article, which he mentions in this letter, suggested that Ellis Island arrivals were coming under the influence of Protestant organizations. Wooten immediately wrote to John J. Burke, the General Secretary of the National Catholic Welfare Council, to protest the measure, and to implore the new NCWC organization to resist "these un-American movements." Wooten's letter and Burke's response are reproduced here. 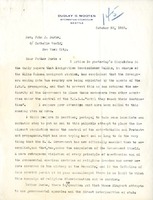