Senator Pat McCarran, 1947
Courtesy of the Library of Congress

Pat McCarran (1876-1954), the son of Irish immigrants, served as the Democratic Senator from Nevada from 1933 to 1954. During his political career, McCarran sponsored several pieces of legislation concerning national security. He opposed President Roosevelt's New Deal during the 1930s, and supported Senator Joseph McCarthy in hunting for Communists in the decade following World War II. In 1951, McCarran joined forces with Rep. Francis Walter D-Pennsylvania), to sponsor a bill that would give the United States government increased powers to bar immigrants and deport both resident aliens and naturalized citizens. It also expanded the racial basis of the national-origins quota system, allowing for certain racial groups to receive preference in the quota system. President Truman vetoed the McCarran-Walter Act, believing that it was "un-American." Congress, however, overrode the president's veto, and the bill became law in late 1952. 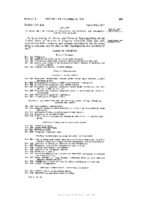 "An Act to Revise the Laws Relating to Immigration, Naturalization, and Nationality"

Letter from Francis Keough and Bruce Mohler to the House Sub-Committee on Immigration and Naturalization, April 4, 1951 →