American Catholic History Classroom > Exhibits > The U.S. Conference of Catholic Bishops and Immigration > Documents > Letter from Francis Keough and Bruce Mohler to the House Sub-Committee on Immigration and Naturalization, April 4, 1951

Letter from Francis Keough and Bruce Mohler to the House Sub-Committee on Immigration and Naturalization, April 4, 1951 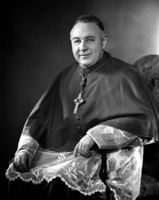 Francis Keough, Archbishop of Baltimore and the chairman of the Administrative Board of the NCWC, along with Bruce Mohler, the long-time head of the NCWC's Bureau of Immigration, sent this analysis of the proposed immigration legislation to Pat McCarran (D-Nevada), the bill's sponsor. It contains a point-by-point response to elements of the proposed legislation. Mohler suggests, as he did about the Johnson-Reed Act of 1924, that the quotas should be increased, that more non-quota immigrant classes were necessary, and that the continuing burden of the literacy test should be dropped. 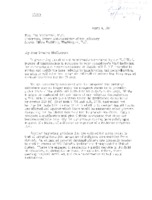