The Burnett bill included the provision of literacy test, which the bill's framers believed would provide a good indication of the immigrant's potential for productive employment and responsible citizenship. In addition, the literacy test offered a way for officials to exclude uneducated or unskilled workers, whom many feared would become a burden on the public. American labor unions in particular supported immigration regulation based on the literacy test, as they feared that unrestricted immigration would saturate the job market with unskilled laborers, undercutting wages and jeopardizing the well-being of American workers.

In 1914, when the Burnett bill was proposed, about three-quarters of all immigrants to the U.S. were from southern and eastern Europe, and most of these were illiterate. Catholic opponents to the literacy test argued that it was not an adequate measure for judging the potential contributions of immigrants to their new society. President Wilson vetoed the Burnett bill after it passed Congress, but the idea of a literacy test for immigration restriction lived on. In 1915, a rally was held in Baltimore which condemned the literacy test. The article reproduced here reports on the rally, and quotes from a letter by Cardinal Gibbons on the subject of immigration. 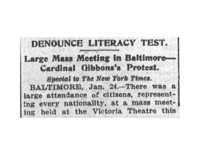