"Resume of Conference Called by Father Burke to Consider the Immigration Problem," November 10, 1920 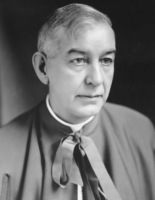 True to his promise to Dudley Wooten, John Burke (1875-1936) called a meeting of the leadership at the NCWC to discuss how the organization could best serve the needs of immigrant Catholics. Burke and his colleagues were especially concerned about reports of Protestant proselytizing at the ports of entry. The minutes of this meeting shed light on the origins of an organized Catholic outreach to new immigrants, and also demonstrate the political maneuverings and public relations campaign that accompanied the appointment of a "Director of Immigration" at the NCWC.

As you read the document (linked below), reflect on the following questions: