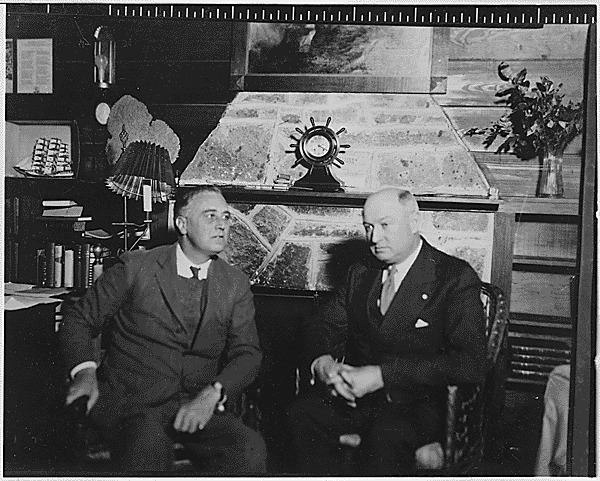 "As Maine goes, So goes Vermont"

Though the quip “As Maine goes, So goes Vermont” was attributed to Franklin Roosevelt’s Campaign Manager James Farley, it was, as Time magazine later noted, a spontaneous comment constituting the “wittiest crack” of the campaign.[i]

Why?  Prior to the 1936 election, the phrase, “As Maine goes, so goes the nation” reflected Maine’s status as a predictor of successful presidential contenders.  Maine elections had traditionally been held before those in other states—earlier winters made November voting difficult there, so elections were held in September.  The party that prevailed in the Maine elections often did in the later campaign for the White House.  When Republicans began winning in Maine’s September 1936 elections, members of the party began touting the phrase in anticipation of a presidential victory against incumbent Franklin Roosevelt that November.

Indeed, the nation’s most respected survey on the presidential question, the Literary Digest poll, which had accurately predicted the previous five elections, announced that the Republican candidate, Alf Landon, would win.  Their conclusion was based on a poll of more than 2 million voters.  However, young upstart pollster George Gallup decided to conduct another public opinion survey and correctly predicted that Roosevelt would win.  As it turned out the Literary Digest had polled mostly its own readers, who were largely affluent and Republican.  Gallup, on the other hand, conducted his poll using a smaller, but demographically representative sample of 5,000 people (pioneering the use of scientifically-based sampling in the process).  Roosevelt won the election by a huge landslide, securing 60.8% of the popular vote to Landon’s 36.5%.  As the election map shows (scroll to year 1936 in the drop down menu on the left), Landon won only two states, Maine and Vermont, prompting the jibe “As goes Maine, So goes Vermont."

Most political scientists and historians agree that the elections of 1932, 1934, and 1936 saw a “political realignment,” that is, an emergence of a new and powerful coalition of voters that would come to shape the outcome of subsequent elections at least until the late 1960s.  White ethnics, union workers, mid-Western farmers, southerners, and intellectuals formed the core of this new coalition, which Roosevelt and his campaign manager Farley made special efforts to organize into a Democratic voting constituency.  These were the individuals who had felt most ignored in the 1920s, a period that saw great national prosperity, but that prosperity was unevenly distributed. The nation’s wealth jumped from just over 74 billion in 1923 to 89 billion in 1929, but a small fraction of the population, the richest .1% of people in the country had a combined income equal to that of the bottom 42%. When thousands of banks failed, billions of savings disappeared, and unemployment jumped to more than 23%, all within the two years of the 1929 stock market crash, the millions of economically vulnerable were affected first. [iii] 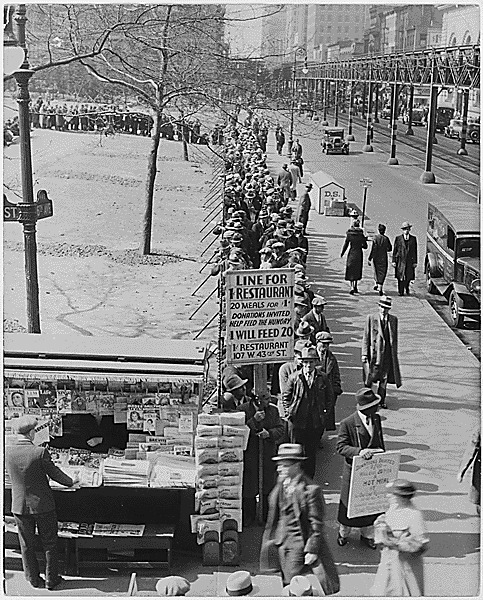 A breadline in New York City, 1932
Courtesy of the FDR Presidential Library

Urban white ethnics were recent immigrants or children of immigrants that found themselves in the most poorly paying jobs and most impoverished communities.  They were often the first to lose their jobs whenever the economy shuddered.  Undercompensated laborers were actively and sometimes violently discouraged from organizing for high wages and benefits by employers, whose anti-union tactics were abetted by government force, legislation or indifference.  Like urban ethnics, both black and white Southerners, most of who were already living in or near poverty, felt the economy contract before the middle classes did.  Farmers’ lives had been plagued by uncertainty since the 1920s: natural disasters and unstable crop prices could throw the once-prosperous farmer into poverty and even homelessness with little warning.[iv] Progressive intellectuals felt dissatisfied with the way Hoover and Congress were addressing the economy and social problems generally.  Hoover may have been sympathetic to the multiplying penniless in his midst, but his brusque manner infuriated many, some of whom paid him sarcastic tribute by naming the shacks they were forced to live in after evictions “Hoovervilles.”  These  millions who felt left behind were inspired by FDR’s aggressive optimism, exemplified in his 1932 Democratic nomination speech, which suggested a ground-up transformation of a society whose riches seemed constantly to elude them:

"I pledge you, I pledge myself, to a new deal for the American people.  Let us all here assembled constitute ourselves prophets of a new order of competence and of courage. This is more than a political campaign; it is a call to arms. Give me your help, not to win votes alone, but to win in this crusade to restore America to its own people."

The motley cluster of groups we today call “the Roosevelt coalition,” or “the New Deal coalition,” it should be noted, were by no means unified in all their politics.  Indeed, urban white ethnics eyed the intellectuals in their midst warily and were in turn regarded with suspicion by mid-Western farmers they had never met.  Their shared sense of economic desperation, along with Roosevelt’s disarmingly cheerful promises of change, however, attracted them in a way Hoover’s serious brooding couldn’t.

The formation of the Roosevelt coalition, moreover, is a much clearer phenomenon in retrospect.  The existence of such a voting block was by no means clear in the campaign preceding the election.  In 1936, no one knew with any certainty that the Gallup poll would prove correct and the Literary Digest poll wrong.  And while Catholics ultimately proved to be willing members of the coalition, there were real fears that they wouldn’t vote for Roosevelt in November 1936.

Catholics and the 1936 Roosevelt Victory →