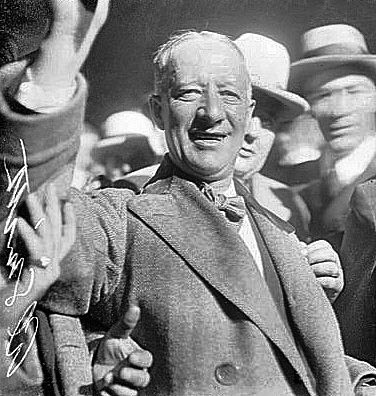 None of this Catholic support was taken for granted during the campaign of 1936, however, nor did all Catholics support a second term for Roosevelt.  To the contrary, relations between certain prominent Catholics and members of the Roosevelt administration were strained.  Even many of Roosevelt’s Catholic admirers, for example, disapproved of aspects of his foreign policy, specifically, the way he and his appointees handled anti-Catholic discrimination practiced by the Mexican government.  Closer to home, Al Smith, a supporter of Roosevelt during the 1932 campaign after he himself had lost the nomination, defected from the party in 1936 and actively campaigned against the president’s reelection.  The New Deal, Smith felt, represented an excessive expansion of the power of the central government, and he publicly fought for the preservation of states’ rights.  Smith’s January 1936 “American Liberty League Speech” at the Mayflower Hotel in Washington D.C. attacked Roosevelt as “communist-oriented.”  Some Catholic newspaper editors agreed with these charges, and launched similar attacks on Roosevelt and his policies in their pages.  Patrick Scanlan of the Brooklyn Tablet, characterized by Father John Ryan as “‘a professional ‘Roosevelt hater’” is one of the more well-known of these.[i]  Roosevelt’s popularity, Scanlan claimed, was on the decline due to continued unemployment and misdirected and excessive government spending.  The Boston Pilot, another Catholic newspaper, similarly believed the New Deal represented an excessive use of government power.  Bureaucratic growth, it charged, would lead to one-man rule.

[i] Flynn, American Catholics and the Roosevelt Presidency, 225.

← Catholics and the 1936 Roosevelt Victory
Next Page: